Niobium is the transition element located in group number 5 and period number 5 of the periodic table. The atomic number of niobium is 41 whereas its atomic mass is 92.90. The single neutral atom of niobium contains 41 electrons.

The nucleus of niobium contains 41 protons and 52 neutrons. It is represented by the symbol “Nb”.

The name Niobium is from the Greek word “Niobe” the Greek mythological figure. Niobe was the daughter of King Tantalus. It was named because it has a chemical similarity to tantalum.

In 1801, Charles Hatchett while visiting and examining minerals at a British museum came across a specimen labeled columbite. That was an American ore sent to the British Museum more than a century ago.

He examined and suspected a new element in it. Hatchett heated columbite with potassium carbonate dissolved the product in water then added acid and finally obtained the precipitate. But he was unable to produce pure element. He named that element columbium from columbite.

After the discovery of Tantalum, the columbium was doubted as both occur together and seemed to be inseparable. In 1846, German chemist Heinrich Rose found that columbite contains both tantalum and a new element which he named niobium.

In 1864, Swedish scientist Christian Blomstrand first isolated the pure niobium element. He did so by reducing niobium chloride in the hydrogen atmosphere.

Niobium does not occur in its free elemental state in nature. Niobium mainly occurs in two chief ores which are columbite and pyrochlore. Plants, lichens and mosses show trace quantities of absorbed niobium. The major minors of niobium are Brazil which produces 85% of the world’s niobium. Others are Canada, Congo, Russia and Nigeria. Some quantities are also obtained as a by-product of tin extraction. 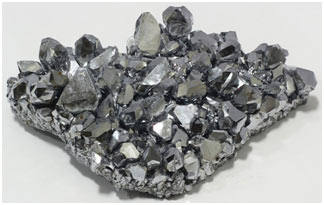 When exposed to air, an oxide layer of different shades according to the thickness of layer is formed. Mostly bluish-green and yellowish shades are observed. It is corrosion resistant due to the formation of the oxide layer. At high temperatures of 200 ᵒC, the metal begins to oxidize rapidly.

Due to its high reactiveness towards oxygen, hydrogen, nitrogen and sulphur; it is always kept in special protective atmospheres. Niobium does not react with acids or even aqua regia at room temperature. But is greatly attacked by concentrated hot acids and alkalies.

The melting point of niobium is 2477°C and its boiling point is 4744°C. It has a density of 8.57 grams per cubic centimeter. Niobium exists in the solid phase at room temperature.

There is no role of niobium has been observed in living organisms. Also, niobium is considered to be non-toxic as no cases of niobium poisoning are reported.

There are almost 28 known isotopes of niobium whose mass number ranges from 83 to 110. The one stable naturally occurring isotope of niobium is Nb- 93.