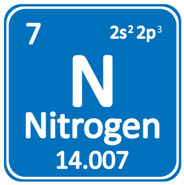 Nitrogen is the seventh element of the periodic table located in group 15. Nitrogen has 7 electrons. The nitrogen has atomic number 7 whereas its atomic weight is 14.

The discovery of nitrogen is credited to various scientists. English physician, John Mayow in 1674, by combusting part of air demonstrated that air is composed of more than one element.

Joseph Black also studied air. He further assigned this to his student Rutherford. In 1772, Rutherford performed an experiment by removing all oxygen and carbon content from the air. Then he tried to burn air but the air was not combusted. He then reported the presence of another element he named ‘noxious air’.

Carl Scheele also performed experiments by removing oxygen with the help of sulfur and iron filings and by burning phosphorus. He reported there is a gas that makes two-third and three-quarters of the original volume of air.

He named this gas ‘spent air’ and published his findings in 1777.

The Earth’s air is composed of 78% of nitrogen. It is also the component of some minerals such as saltpeter. In soil, it is present in the form of nitrites and nitrates. 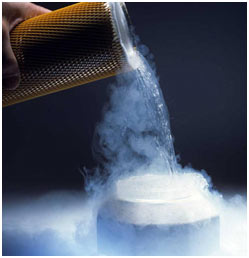 Nitrogen is non-metal and in its pure elemental form, it is colorless, tasteless, odorless diatomic gas. It is an inert gas and like other members of its group, nitrogen is a poor conductor of current and heat.

The melting point of nitrogen is -210.00°C and its boiling point is -195.79°C. The density of nitrogen is 0.0012506 grams per cubic centimeter. Nitrogen is involved in the formation of the beautiful coloration of aurora lights.

Nitrogen is essential to all life forms. It is the part of nucleic acids, DNA, and proteins. Hence, it is an important part of the genetic code. Plants possess nitrogen mostly in the form of nitrites and nitrates.

Some bacteria fix nitrogen and help plants to absorb this. All this process of fixation is called the nitrogen cycle which is very important for maintaining balance in an ecosystem. For the needs of plants, it is used in fertilizers.

But excess nitrogen can cause soil leaching. In high amount, it also promotes algal bloom which in turn cause deficiency of oxygen in the water due to the high rate of photosynthesis in algae. Thus, are the cause of death of numerous aquatic species.

The greatest commercial use of nitrogen is as a part in the manufacture of ammonia by Haber process, consequently utilized as fertilizer and to produce nitric acid.

Liquid nitrogen (typically described as LN2) is utilized as a refrigerant for freezing and transporting food products, for the conservation of biological specimens such as reproductive cells (sperm and eggs), and for the storage of biological samples.

Nitrogen is used as an inert replacement for air where oxidation is unfavorable.

Nitrogen gas is mostly inert and is used as a protective shield in the semiconductor industry and throughout specific types of welding and soldering operations.

Nitrogen- 14 is abundant of all and makes up 99% of all nitrogen. It has many practical uses in the fields of agriculture, food, biochemicals and used in research works.

Nitrogen- 15 has importance in medical research and preservation. It has wide use in brain study, MRI and NMR (Nuclear Magnetic Resonance) techniques. In research works, it is used to label different specimens such as proteins.