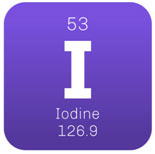 Iodine is the member of the halogen family in group VII A of the periodic table placed at the fourth number. Iodine contains 53 electrons and 53 protons in its neutral form. The atomic mass of iodine is 127. This tells us that it has 74 neutrons in its nucleus.

Iodine gets its name from the Greek word “Iodes” which means violet. This is because it has a violet color due to the reflecting wavelength of visible light.

Bernard Courtois in 1811 discovered iodine as a new element. He added sulphuric acid on seaweed and observed purple fumes which he guessed was a new element. For further systematic investigations, he sent this to Charles Bernard and Nicolas Clement who also confirmed this.

Iodine is present in both Earth’s crust and oceans but in greater amounts is in oceans. It occurs in the form of iodine ions in seawater and seaweed. Some amount of iodine is also present near the underground reservoirs of oil and gas. It is also a part of some minerals and soils.

Iodine is a bluish-black, non-metallic, least reactive lustrous solid in the halogen family. It is most electropositive. Although it is non-metal but it also shows some properties of metals.

The melting point of iodine is 113.7 ᵒC and the boiling point is 184.4 ᵒC. It has a density of 4.93 grams per cubic centimeter. It is the heaviest and least stable halogen.

As iodine belongs to the halogen family, it means it is salt-forming. On reaction with metals iodine forms salts such as sodium iodide, potassium iodide, magnesium iodide, etc. 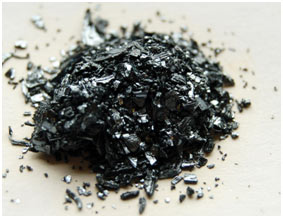 While iodine is not an essential nutrient for plant growth, fertilizing with iodine derivatives has been shown to aid in biomass production and increase the antioxidant levels in plants which help during drought and stress resistance.

It is also the part of some aquatic plants where it maintains the metabolism and antioxidant levels.

Iodine (I) is a necessary component of proteins produced by the thyroid. It is therefore essential for maintaining the appropriate performance of the thyroid gland. Iodine promotes the healthy growth and development of young animals.

Iodide is included in small amounts in salt, in order to avoid iodine deficiency affecting the thyroid gland. The radioactive isotope iodine-131 is in some cases utilized to deal with cancerous thyroid glands.

Iodine is used in medical treatment as cast and iodoform and is used in the preparation of certain drugs.

It is likewise an ingredient of water purification tablets that are utilized for drinking water preparation.

Potassium iodide (KI) is used to make photographic films and, when combined with iodine in alcohol, as an antibacterial for external injuries.

Iodine is utilized as a test for starch and turns a deep blue when it can be found in contact with it.

There are 30 recognized isotopes of iodine, however only one is naturally occurring, the I-127. The radioactive isotope of iodine that is Iodine-131 has significance in the medical field.

It is utilized in medication to monitor thyroid gland working, to deal with goiter and thyroid cancer, and to locate tumors of the brain and of the liver. It is also utilized in examinations to trace the course of substances in metabolism.