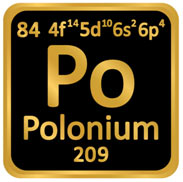 Polonium is a metalloid present in group number 16 of the periodic table. The atomic number of polonium is 84 whereas its atomic mass is 209. Polonium has 84 electrons in its single atom. It has 84 protons and 125 neutrons in its nucleus. Polonium is represented by the symbol “Po”.

Polonium got its name after the name of the country Poland. This was due to the fact that polonium was discovered by Marie Curie and Poland was his native country.

Mendeleev predicted that there might be an element that followed bismuth and he predicted his atomic weight around 212.

In 1898, Marie Curie and his husband Pierre Curie, while working on radioactivity discovered the element polonium. They extracted some from pitchblende – the uranium oxide U3 O8 while investigating it.

Polonium is rarely found in nature. It is present in uranium ores and some amounts can be obtained from uranium oxide. But generally, it is not obtained from ores.

Usually, polonium is obtained by bombarding bismuth- 209 in nuclear reactors with neutrons. Bismuth- 210 is produced which has a half-life of 5 days and decays into polonium through beta decay. Polonium- 210 is a strong alpha-emitter.

Polonium is a radioactive, low melting, silvery-greyish metalloid which is rarely present in nature. It readily reacts and dissolves in dilute acids but slightly reacts and is soluble in alkalis. Polonium is volatile, half of its sample can evaporate within three days.

That is why it is kept in a sealed container. The melting point of polonium is 254°C and its boiling point is 962°C. Polonium has a density of 9.32 grams per cubic centimeter. It exists as solid at room temperature.

There is no known significant role of polonium in living organisms. But due to its radio activeness, it is highly toxic. Polonium- 210 is present in the smoke of cigarettes and can itself cause cancer.