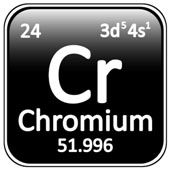 Chromium is a transition metal with atomic number 24 and atomic mass 52 present in group 6 of the periodic table. Chromium has 24 electrons. It has 24 protons and 28 neutrons in its nucleus. Chromium is represented by the symbol “Cr”.

The name chromium is from the Greek word “chroma” for the “color”. It is because chromium produces range of colors when dissolving in solution. The green color of emeralds is due to chromium.

In 1797, French chemist Nicholas Louis Vauquelin discovered chromium. In 1776, Red mineral was discovered in a Siberian gold mine. Vauquelin was fascinated by it. A red mineral is now known called as crocoite. It is lead chromate.

Vauquelin crushed the red mineral and boiled it with potassium carbonate. He obtained lead carbonate and yellow chromium potassium salt solution. He performed further experiments on the solution.

In 1781, he was finally able to isolate the metal. He eliminated lead from the mineral by dissolving it in hydrochloric acid and then precipitated lead. He then obtained chromium oxide by evaporation and isolated chromium by heating oxide in a charcoal oven.

Vauquelin also discovered that the colors of ruby and emeralds are due to chromium. 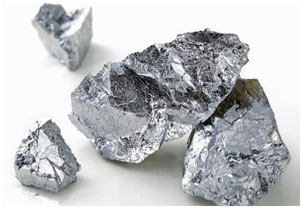 Chromium is the twenty-fourth abundant element and never occurs in its elemental form in nature. It is present in minerals, ores, and rocks. The major mine of chromium is chromite. Chromium ores are widely distributed in Zimbabwe, Canada, Finland, Kazakhstan, Greenland, the Philippines, etc.

Chromium is a silvery blue-white metal that is very hard, lustrous, highly polished, and very corrosion resistant. It is also malleable, tasteless, and odorless metal. It does not tarnish and form a thin protective coat when heated in air to form green chromium oxide.

Chromium has a high melting point of 1907°C and its boiling point is 2671°C. It has a density of 7.15 grams per cubic centimeter. Chromium exists as a solid at room temperature.

Chromium compounds have different beautiful colors such as lead chromate is yellow, chromium III oxide is green, chromium trioxide is red, and anhydrous chromium chloride is purple in color. 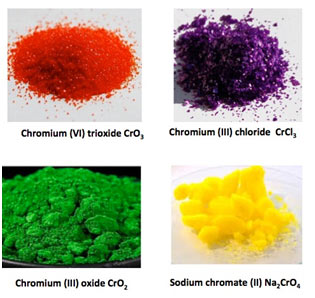 Chromium is an essential bioelement that is required in trace amounts. It has various functions that play role in the proper working of enzymes and aid in the utilization of glucose.

Excess of chromium is however very dangerous even fatal. Some compounds of chromium, for example, Chromium VI is carcinogenic and fatal.