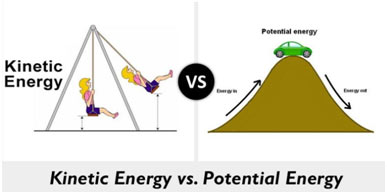 “A body possesses energy if it is capable to do work”.

“Energy is defined as the capacity of a physical system to perform work”.

The energy of running water can be used to run water mills or water turbines. Energy exists in numerous kinds such as mechanical energy, heat, light energy, sound energy, electrical energy, chemical energy and nuclear energy, and so on. Energy can be transformed from one kind into another.

Mechanical energy possessed by a body is of two types: kinetic energy and potential energy.

The energy possessed by a body due to its movement is called it’s kinetic energy.

Moving air is called wind. We can utilize wind energy for doing various things. It drives windmills and pushes sailing boats. Similarly, moving water in a river can bring wood logs through big ranges and can likewise be used to drive turbines for generating electrical power. Therefore, a moving body has kinetic energy, since it can do work due to its motion. The body stops moving as quickly as all of its kinetic energy is used up.

K.E. of the body = Work done by it due to movement

Since motion is opposed by force like friction hence ‘a’ is negative.

This equation provides K.E possessed by a body of mass m moving with velocity v.

The energy possessed by a body due to its position is referred to as its potential energy.

The energy present in a body due to its height is called gravitational potential energy. 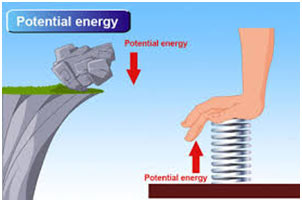 The energy present in a body due to its elasticity is called elastic potential energy.

Let a body of mass m be raised up through height h from the ground. The body will get potential energy equal to the work carried out in lifting it to height h.

Here w = weight of the body, so the equation becomes

Thus, the potential energy possessed by the body with respect to the ground is mgh and is equal to the work performed in raising it to height h.