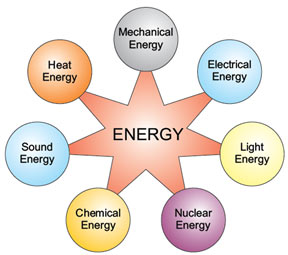 Energy exists in various forms. Some of the main forms of energy are discussed below.

The energy possessed by a body both due to its movement or position is called mechanical energy. Water diminishing a stream, wind, a moving car and truck, a lifted hammer, a stretched bow, a catapult or a compressed spring, and so on have mechanical energy.

Heat is a kind of energy given out by hot bodies. A large amount of heat is obtained by burning fuel. Heat is likewise produced when movement is opposed by frictional forces. The foods we take supply us with heat energy. The Sun is the main source of heat energy. When you knock at the door, you produce sound. Sound is a kind of energy. It is produced when a body vibrates; such as vibrating diaphragm of a drum, vibrating strings of a sitar, and vibrating air column of wind instruments such as flute pipe and so on.

Light energy is a kind of electromagnetic radiation. Light includes photons, which are produced when an object’s atoms heat up. Light travels in the form of waves and is the only form of energy visible to the human eye. Plants produce food in the presence of light.

We also require light to see things. We get light from candle lights, electrical bulbs, fluorescent tubes, and also by burning fuel. However, most of the light comes from the Sun.

Chemical energy is present in food, fuels, and other compounds. We get other kinds of energy from these substances during the chain reaction. The burning of wood, coal, or natural gas in air is a chain reaction which releases energy as heat and light.

Electric energy is acquired from electrical cells and batteries as a result of a chemical reaction between numerous substances present in them. Animals get heat and muscular energy from the food they consume. Law of Conservation of Energy

According to the law of conservation of energy, the overall energy of a system stays constant, though energy might transform into another kind. Two billiard balls colliding, for example, might come to rest, with the resulting energy becoming sound and maybe a bit of heat at the point of collision. When the balls are in motion, they have kinetic energy. Whether they remain in motion or stationary, they also have potential energy since they are on a table in the air.

Energy can not be created, nor destroyed, but it can alter forms and is also related to mass. The mass-energy equivalence theory mentions an object at rest in a frame of reference has rest energy. If extra energy is provided to the object, it actually increases that object’s mass. For instance, if you heat a steel bearing (including thermal energy), you very slightly observe the increase in its mass.

According to the law of conservation of energy

“Energy cannot be destroyed however it can be converted into some other forms.”

For example, rub your hands together quickly. You will feel them warm. You have used your muscular energy in rubbing hands as a result heat is produced. In the process of rubbing hands, power is converted into heat energy.

Processes in nature are the results of energy changes. For instance, a few of the heat from the Sun is taken up by the water in the oceans. This increases the thermal energy. Thermal energy causes water to evaporate from the surface area to form water vapors.

During the interconversion of energy from one kind to another kinds, the overall energy at any time remains constant.

Ans: Energy is required for various activities and for work done. All the movements and life activities are run and govern by energy. We need energy to grow and perform work.

Q2: How is energy converted from one form to another?

Ans: The law of conservation of energy states that energy can neither be created nor be destroyed but can be transformed from one form to another. During the conversion, the overall energy of a system at any time remains constant.

Q3: What devices can convert electrical energy to mechanical energy?