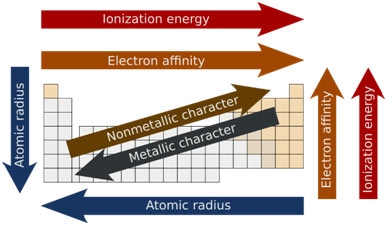 Trends in the Periodic Table

Atoms are so small that it is difficult to see an atom even with an effective and powerful optical microscope. The size of a single atom therefore can not be determined. However, methods have actually been established which can determine the range between the centers of two bonded atoms of any component. Half of this range is considered to be the radius of the atom.

Trend in the group:

In the periodic table, the atomic radius increases from top to bottom within a group due to an increase in atomic number. This is because of the addition of an extra shell of electrons in each period. Trend in the period:

In a period, however, as the atomic number increases from left to right, the atomic radius reduces. This steady reduction in the radius is because of an increase in the positive charge in the nucleus.

As the positive nuclear charge increases, the negatively charged electrons in the shells are pulled closer to the nucleus. Hence, the size of the outer shell ends up being slowly smaller sized. This effect is rather impressive in the elements of longer periods in which “d” and “f” subshells are included. For example, the progressive decrease in the size of Lanthanides is substantial and called Lanthanide Contraction.

When a neutral atom loses one or more electrons, it becomes a positive ion. The size of the atom is reduced in this procedure because of two reasons.

First, the removal of one or more electrons from a neutral atom usually leads to the loss of the outer shell, and second, the elimination of electrons triggers an imbalance in the proton-electron ratio. Due to the greater attraction of the nuclear charge, the remaining electrons of the ion are drawn closer to the nucleus.

On the contrary, a negative ion is larger than its parent atom. The reason is that the addition of several electrons in the shell of a neutral atom boosts repulsion between the electrons causing expansion of the shell. Thus, the radius of the fluorine atom is 72pm and that of the fluoride ion F– is 136pm.

Elements with a greater number of electrons have more than one value of ionization energy. So, for magnesium, the very first ionization energy value is the energy required to remove the first electron:

Likewise, the 2nd ionization energy value is the energy needed to remove the second electron.

The facts upon which the ionization energy of an atom generally depends are the magnitude of nuclear charge, size of the atom, and the “shielding effect”. The shielding effect is the repulsion due to electrons in between the nucleus and the outermost shell. This effect increases, as the size of the atom increases due to the addition of an extra shell successively in each period hence a greater number of electrons shields the nucleus. Going down in a group, the nuclear charge increases however as the size of the atom and the number of electrons triggering the shielding effect likewise increases therefore ionization energy reduces from top to bottom. That is why in alkali metals, for instance, it is easy to remove an electron from caesium atom than from lithium atom.

Typically, the smaller the atom with greater nuclear charge, the more strongly the electrons are bound to the nucleus, and for this reason higher the ionization energy of the atom. By moving from left to right in a period, the outer shell stays the very same, while the nuclear charge increases effectively that makes the elimination of an election difficult and for this reason, the value of ionization energy increases. Although, the number of electrons also increases in this case however the shielding is not really effective within the very same shell. The inert gases have the greatest values of ionization energy due to the complete outermost shell in them, the elimination of electron is extremely difficult.

The electron affinity is the energy released or taken in when an electron is added to a gaseous atom to form a negative ion.

Energy is usually released when electronegative elements absorb the first electron and E.A, in such cases is expressed in negative figures, as when it comes to halogens. When a second electron is added to a uni-negative ion, the incoming electron is fended off by the already present negative charge and energy is absorbed in this procedure.

Electron affinity usually increases with an increasing atomic number within a period and reduces from lighter to heavier elements in an offered group of the periodic table. Understanding of electron affinities can be combined with the understanding of ionization energies to predict which atoms can easily lose electrons and which can accept electrons quicker. It has already known that elements of the periodic table can be divided into metals, non-metals, and metalloids. Chemically all the elements which have a tendency to form positive ions by losing electrons are thought to be metals. All metals are good conductors of heat and electrical energy. A particular property of metals is that they form fundamental oxides which offer bases when dissolved in water.

Trend across the Periodic Table

As it becomes easier to remove the electron of an atom larger in size, therefore metal character increases from top to bottom in a provided group of elements. On the contrary, it reduces from left to right across a period. The elements of group VIIA (the halogens) are the least metal in nature.

The elements which attain electrons and form negative ions are called non-metals. All the gases are non-metals. The non-metals are normally a bad conductor of heat and electricity. Nonmetals form acidic oxides which yield acids on dissolving in water.

The non-metallic character of an element decreases as the atomic size increases. For that reason, in a group of non-metals like halogens, the non-metallic character decreases from top to bottom. The member at the top, fluorine, is the most non-metallic element of the periodic table. This pattern can likewise be validated in the elements of groups VA and VIA. Nitrogen and oxygen are pure non-metals and typically exist in a gaseous state while bismuth and polonium, the members at the bottom of these groups, are relatively metal in nature.

Melting and boiling points of elements inform us something about how strong the atoms or molecules in them are bound together.

(a) Variation in a Period

Since carbon has the optimal number of binding electrons, hence it has a really high melting point in diamond in which each carbon is bound to four other carbon atoms. In general, the elements which exist as huge covalent structures have extremely high melting points.

An important change takes place when we move from group IVA to groups VA, VIA, VIIA as the lighter elements of these groups exist as small, covalent molecules, rather than as three-dimensional lattices. For instance, nitrogen, oxygen, and fluorine exist as specific particles which have really weak intermolecular forces between them. Subsequently, their melting and boiling points are very low. (b) Variation in a Group

The melting and boiling points of IA and IIA group elements reduce from top to bottom due to the increase in their atomic sizes. The binding forces present between large-sized atoms are fairly weaker as compared to those in-between smaller atoms. For elements of group VIIA, which exist in the form of molecules, the melting and boiling points increase down the group. This is because big molecules put in a more powerful force of attraction due to their greater polarizabilities.

Nevertheless, for the components of group VA, the oxidation states are either the number of electrons present in the valence shell (which is like their group number) or the number of vacancies available in these shells. Transition elements, which are displayed in B subgroups of the periodic table, also reveal the oxidation specifies equal to their group number as it can be seen for Cu(I), Zn (II), V(V), Cr (VI), and Mn (VII). However, due to the greater number of valence electrons readily available in partially filled d-orbitals these elements typically, reveal more than one oxidation state in their substances.

One of the most familiar properties of metals is their ability to conduct electrical power. This property is mainly due to the existence of reasonably loose electrons in the outermost shell of the element and ease of motion in the strong lattice. The electrical conductance of metals in groups IA and IIA, normally increases from top to bottom. However, the trend is not devoid of the individual variation in different atoms. In the series of transition metals, the values of electrical conductance differ so abruptly that no basic pattern can be designated to them. Carbon, in the form of diamond, is non-conductor because all of its valence electrons are tetrahedrally bound and unable to move easily, while in the form of graphite, carbon is a pretty good conductor due to the fact that among its four valence electrons is relatively totally free to move.

The lower elements of group IVA, tin and lead, are pretty good conductors and their values of electrical conductivity are equivalent to those of their equivalents in group IA.

significantly by moving from left to right in a period as the charge to size ratio increases, as found in the metal ions of the third period. Q1: What is the SI unit of atomic size?

Ans: Atomic size or atomic radii are measured in picometers which are equal to 10 -12. For example, the atomic radius of a carbon atom is 77 pm.

Ans: Energy required to remove the electron from unipositive ion is called second ionization energy. This value is higher than first one due to small cationic radius than parent atom and greater nuclear attraction on the remaining electrons.

Q4: Why metallic character increases from top to bottom?

Ans: The tendency to form positive ions is metallic character. It is easier to remove the electron of an atom bigger in size, therefore it increases from top to bottom.

Q6: What is electrical conductance?

Ans: The property of elements due to the presence of relatively loose electrons in the valance or outermost shell and their relatively free movement in a solid state is called electrical conductance.

Q7: What is hydration energy?

Ans: “The heat absorbed or emitted when one mole of gaseous ions dissolve in water to give an infinitely dilute solution is called hydration energy.

Q8: Why melting and boiling points decrease down the group?

Ans: This is due to an increase in their atomic size. The bonding forces between them are relatively weaker as compared to smaller atoms.