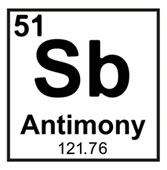 Antimony is a metalloid located in group number 15 and period number 5 of the periodic table. The atomic number of antimony is 51 whereas its atomic mass is 121.760. The single neutral atom of antimony contains 51 electrons. There are 51 protons and 70 neutrons in its nucleus. Antimony is represented by the symbol “Sb” from its foreign name Stibium.

The name antimony comes from the two Greek words “anti” and “monos” which literally means “not alone”. This was named because antimony is rarely found as a free element. It most of the time occurs in a combined form with copper, silver, lead, etc.

Antimony is known to man since ancient times. There was a discovery of an antimony vase in Paris almost 5000 years old. Egyptians used antimony sulphide in their cosmetics. The black color of mineral stibnite was used as Mascara or eyeliner.

In the first A.D century, a roman author Pliny used the name stibium from which the element symbol came from. He described that metal was found in silver ores.

In the 1500s, an Italian metallurgist Vannoccio Biringuccio described that antimony was about to be pure metal but stopped doing do because of early mining. Alchemists were successful in the production of elemental antimony.

In 1707, a French chemist Nicolas Lémery was the first who published his findings on antimony and its compounds. 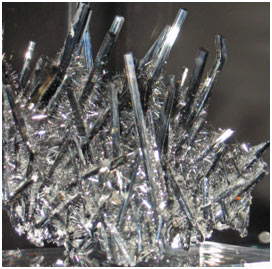 It is naturally found in the environment; rarely in free form but mostly exists in a combined state with other elements like silver, copper, lead, etc. The major antimony-containing ores are stibnite, jamesonite, and valentinite. It is also found in silver, copper, and nickel ores. the major producers of antimony are China, South Africa, Bolivia, and Russia.

Antimony is classified as metalloid or semi-metal so it has two forms. The metallic form is silverish bright, brittle, and hard whereas the non-metallic form is greyish powder. The conductivities of antimony are less than metals. It is poor thermal and electrical conductor.

In dry air, antimony remains stable and is not dissolved by acids and bases. The melting point of antimony is 630.63°C and its boiling point is 1587°C. It has a density of 6.685 grams per cubic centimeter. The element exists in solid phase at room temperature.

There is no role of antimony in biological systems but it is considered to be very toxic. Antimony and its compounds are considered to be highly carcinogenic. Stibnite causes irritation to the eyes, lungs, and skin.

Long-term exposure to antimony and its compounds can cause severe lungs and heart problems, stomach and gut disorders, diarrhea, ulcers, or vomiting. 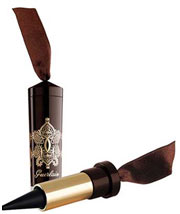