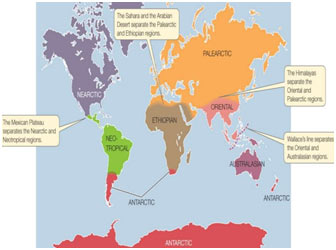 In this article, we will discuss the physical features, climatic conditions, and faunal composition of the Palaearctic region.

The Palaearctic region is the largest zoogeographical region of the six. This region shows a wide range of temperature fluctuations. It includes:

It includes Northern and Central Europe, the Black Sea, and the Caucasus. This region has 85 families of vertebrates. Among them six are amphibians, six are reptiles, one genus of mammals, and birds like tits and wagtails are present.

Some parts of Europe, Africa, and Arabia are part of it. This region has 124 families of vertebrates.

Northern Asia and Himalayas are the part of it. There are 94 families of vertebrates in this region. Musk and moles are present here.

Japan, Mongolia, Korea, and Manchuria are the countries in this region. This region includes mammals such as pandas, tigers, deer.

Palaearctic region is surrounded by the sea to the west, north, and east and by Sahara and Himalayas to the south. Here the climate is almost temperate. This includes wet forest lands, dry open steppe, as well as large coniferous forests.

Temperature fluctuations, greater variations in rainfall patterns, diversity of surface features are all characteristics of the Palaearctic region. 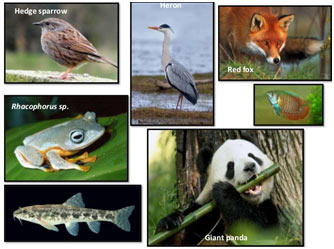 This region has 33 families of terrestrial mammals. One-third of them are mice, dogs, cats, squirrels, and rabbit families. Other animals include are hedgehogs, porcupines, civets, giant pandas, pigs, and hyenas.

This region shares four families with Nearctic and four with the African region. Some of them are mole, beavers, jumping mice, and flying squirrels.

The two families of mammals that are unique to the Palaearctic region are rodents namely Spalacidae and Selevinidae. Each family is represented by only one genus. Spalax is a yellow-brownish burrowing rat without a tail. Selevinia is a remarkable camel and was discovered in 1938 in Kazakhstan.

This region has 53 families of birds. The majority of them are migratory birds. The Palaearctic birds are ducks, stork, cuckoos, cranes, wrens, kingfishers, thrushes, blackbirds, swallows, hawks, gulls, etc.

These birds have wide distribution and are shared with Oriental, Nearctic, and African regions. The only family restricted to this region is the family of ‘hedgehog sparrow’. This region has no parrots.

The Palaearctic region has a large number of tailed amphibians. These are mainly newts and salamanders. Tailless amphibians include toads, frogs. There are few frogs of hylid and polypedatid families.

There is no restricted or endemic fish family in the Palaearctic region. Here carp is a dominant family. Others are pikes, salmons, perches, and eels.

Affinities to other regions

The Palaearctic region has not had very rich vertebrate fauna. This is a complex of Old World Tropical and New World Temperate. The majority of mammals in this region have been shared with Nearctic, Oriental and African regions. These mammals are civets, hyenas, deer, bears, shrews, squirrels, murids, dogs, bats, pigs, and porcupines.

The only mammalian family which has discontinuous distribution is the camel family.