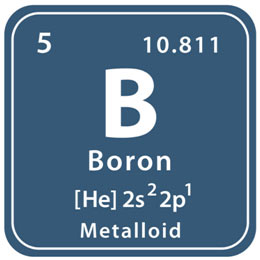 Boron is a chemical element with the symbol B and atomic number 5. Produced completely by cosmic ray spallation and supernovae and not by outstanding nucleosynthesis.

Boron is not an abundant element. It constitutes about 0.001 percent by weight of Earth’s crust. It happens in traces in a lot of soils and has been found to be essential in extremely small amounts for the proper growth of numerous plants. Boron is always found in nature combined with oxygen, usually as oxyborate ions. Boron present mainly as salts of different polyboric acids.

Boron is the very first member of the Group IIIA, it reveals lots of dissimilarities with the members of its own group. The difference in the properties of boron and those of the other members of the series is generally due to the big distinction in their sizes and ionization energies.

Borax is the sodium salt of tetra boric acid. It is the most crucial of all borates.

Borax takes place as a natural deposit called tincal in the dried-up lakes of Tibet and California.

The clear solution from the top is removed and is then permitted to crystallize when crystals of borax separate out. To get more borax, CO2 is blown through the mother-liquor, the salt metaborate is decomposed into borax, which separates out in the form of fine crystals.

The hydrolysis is prevented in the existence of glycerine.

Hydrolysis of B4O7-2 happens as follows:

So, a strong alkali (NaOH) is formed which is highly ionized. On the other hand, boric acid (H3BO3) is ionized to some degree, due to the fact that it is a weak acid. Thus, the solution of borax as a whole is alkaline in nature.

Prepare a loop at the end of a platinum wire. Heat the wire and take a little powdered borax on the hot loop. Heat again, borax first inflates and then melts into colorless, glasslike bead on the loop. Now put a couple of grains of the compound, under examination, on the beads and re-heat it first in the oxidizing flame and then in the reducing flame. 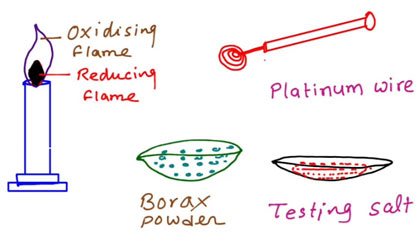 Chemistry of the Borax-bead Test

Borax, when fused, is decomposed into sodium metaborate and boric anhydride.

The metallic oxide formed from the compound, under examination, integrates with B2O3giving the colored metallic borates. With cupric oxide, the beads are colored blue in the oxidizing flame because cupric borates are blue in color. 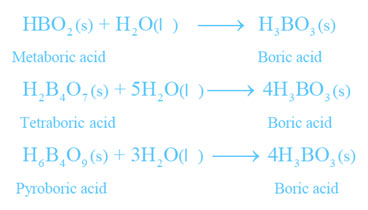 It is a white crystalline chemical compound (triclinic), moderately soluble in cold water (2.6% at 40 ° C) but dissolves readily in hot water (37% at 107 ° C). This temperature variation in solubility forms the basis for its separation and filtration.

On an industrial scale, boric acid is prepared from a natural calcium borate called colemanite (Ca2B6O11. 5H2O) by suspending it in boiling water while Sulphur dioxide is passed through it. Boric acid crystallizes out from the solution while, the other product CaSO3 stays in the solution.

A hot concentrated solution of borax is treated with a determined amount of conc. H2SO4. On cooling, crystals of boric acid formed, separate out.