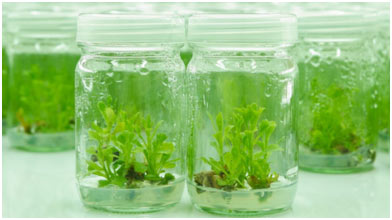 Tissue culture is the growth of tissue that may be of plants, animals, or any other organism in an artificial liquid culture medium.

In 1902, German botanist Gottlieb Haberlandt said that plant cells are totipotent i.e., each cell has the full genetic potential of the organism and therefore a single cell could become a complete plant.

In 1958, F. C Steward a botanist of Cornell University grew a complete carrot plant from a tiny piece of phloem. He provided the cells with sugars, minerals, and necessary vitamins. He also added coconut milk.

It was discovered later that coconut milk contains cytokinin – the plant hormone. When the cultured cells began dividing, they produced a callus. A callus is an undifferentiated group of cells. Then the callus differentiated into shoots and roots and developed into a complete plant.

Tissue culture techniques are the gift of modern biotechnology and now led to micropropagation. This is the commercial method of producing thousands, even millions of identical seedlings in a limited amount of space.

One of the simplest and easiest methods to accomplish micropropagation or tissue culture is meristem culture. If the correct proportions of auxins and cytokinin are added to a liquid medium, many new shoots will develop from a single shoot tip. 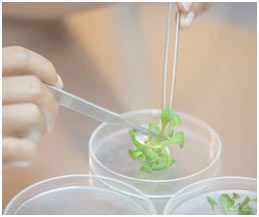 When these developed shoots are removed, more shoots are formed. Since the shoots are genetically identical, the adult plant that will develop from these shoots are called clonal plants and have the same traits.

The advantage of the meristem culture is that unlike other portions of a plant is virus-free, therefore the plants produce are also virus-free. The presence of viruses makes plants weak and less productive.

Anther culture is a technique in which mature anthers are cultured in the medium containing minerals, vitamins, and growth regulators.

Rapidly growing cultures are cut into small pieces and shaken in a liquid medium so that single cells or small clumps of cells break off and form a suspension. 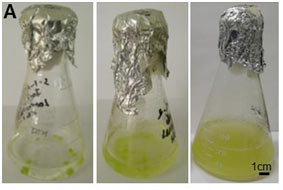 If this is possible, there will no longer need for farming plants for the purpose of acquiring the chemicals they produce.