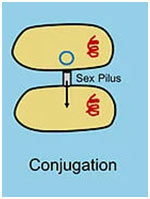 The transfer of genetic material between bacteria through cell-to-cell contact is called bacterial conjugation. Conjugation is the mechanism of horizontal gene transfer. And often incorrectly regarded as sexual reproduction.

Conjugation does not involve the fusion of gametes and the formation of zygotes. That is why it is not actually sexual mating. It is just the transfer of genetic information from a donor to a recipient cell (bacteria).

The bacterial cell which donates conjugative or mobile genetic elements in the form of the conjugative plasmid is called the donor.

The bacterial cell which accepts or receives the mobile or conjugative genetic, which is not already contained by itself, is called the recipient.

Most conjugative plasmids have systems that ensure the mechanism that the recipient only receives the unique genetic element. This transferred genetic material can be beneficial to the recipient. Some of them are used to transfer antibiotic resistance or enzymes. 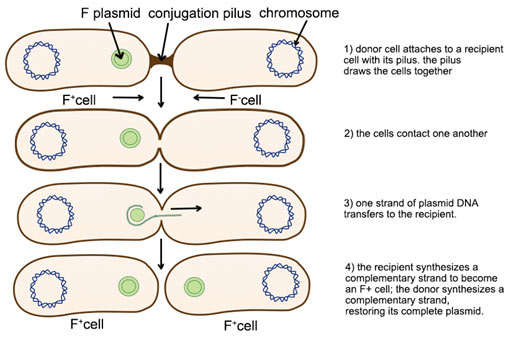 The prototype for conjugative plasmids is the F – plasmid which is also known as F – factor. The F- plasmid is an episome. Episome is a plasmid of about 100 kb length that can integrate itself into the bacterial chromosome by genetic recombination.

The F plasmid carries pilin and regulatory genes. These genes form sex pili on the cell surface. They also form polymeric proteins. These proteins can attach themselves to the surface of F negative bacteria and initiate conjugation. F plasmid also forms some proteins which open the channels between the bacteria.

Conjugation is initiated by mating signal. A complex of proteins called relaxosome creates a nick in one plasmid DNA strand. Relaxosome consists of many proteins and integrated host factor (IHF).

There are two cultures of bacteria:

Some culture of cells contains non-integrated F plasmids. These are responsible for low frequency of chromosomal gene transfer.

Some strains of bacteria have integrated F plasmids. Such strains transfer chromosomal genes very efficiently. So, they are called H fr – High frequency of recombination. An H fr cell is a bacterium with a conjugative plasmid often integrated into its genomic DNA.

F factor integrates itself through the insertion point in the bacterial chromosome. Thus, unlike a normal F+ cell, H fr strains can transfer their entire DNA through pili to the F- cell. F factor can transfer itself over pili during bacteria conjugation. Therefore, rest of the bacterial genome is dragged along with it.

Mating always occur between F+ and F-. F plasmid is integrated into the host genome. Donor chromosomal DNA may be transferred along with plasmid DNA. The chromosome of donor bacteria replicated before this transfer.

Therefore, its genes are not lost. The amount of chromosomal DNA transferred depends on the timing of contact. For common laboratory strains of E. coli, the transfer of the entire bacterial chromosome takes about 100 minutes. The transferred DNA can be integrated into the recipient genome via recombination.

The newly acquired DNA aligns with the homologous region of cells’ own chromosomes. A crossover changes DNA between these two. Binary fission of these cells gives rise to new recombinant bacteria.

The genes of these bacteria are derived from two different sources. So, they do not form a clone. The members of a colony that share single genetic ancestor is called a clone.