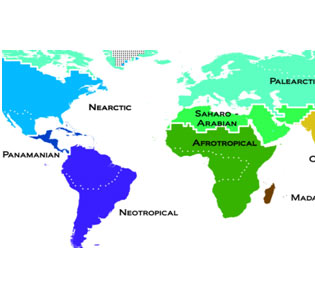 In this article, we will discuss the zoogeographical realm – the Ethiopian region, its physical features, climatic conditions, and zoological characteristics.

Ethiopian region consists of the whole of Africa except for its northern part which is the part of the Palaearctic region, and the southern part of Arabia. Some authors include the large island of Madagascar and its surrounding neighboring islands in the Ethiopian region.

Geographically and geologically, Madagascar is very distinctive and has different zoological characteristics from the Ethiopian region. So, it is treated separately from Continental Island.

This region has high temperatures and desert conditions. This consists of Tropical Africa and Tropical Arabia and the Sahara Desert. It has common desert animals such as camel, ostrich, zebra, etc.

This region is also included in the Ethiopian region. It has some peculiar fauna which includes African lungfish, African mole, rats, etc.

The evolution of the Ethiopian region developed lemurs in Madagascar and thus separated it from the mainland. There is no connection and are many dissimilarities in the fauna of both regions. Now it is treated as another Continental region.

This subregion includes Madagascar and neighboring islands. There are no new animals. Here the fauna is represented by old animals. Some eutherians invaded this region. Lemurs and Chameleons are famous in this region.

Almost all sides of this region are surrounded by the sea except for the northern side which is the Sahara Desert. The Sahara Desert is the largest desert in the world and acts as a barrier between Palaearctic and Ethiopian regions.

African is region is present in between tropics, here life conditions are much more uniform. This region contains thick, dense forests, high mountains, grassy plains, and big rivers. In January the whole region has a temperature of somewhat between 20 to 30 ᵒC with a still higher temperature in Central Africa.

Moisture conditions affect the distribution of plants and animals more than temperature. The great diversity of flora here supports a variety of endemic fauna. 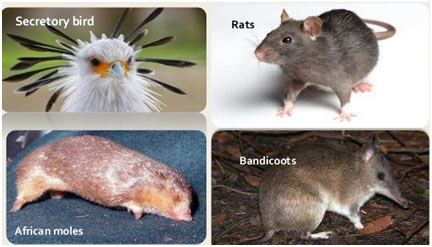 The Ethiopian region has very rich fauna which also varies greatly and well-marked. This region contains as many as 161 families of terrestrial vertebrates out of which 12 families are exclusive to this region.

There are 38 families of mammals out of which 12 are endemic to this region.  These endemic families include:

The animals which it shares with the oriental region are monkeys, pangolins, lorises, Cheetahs, rhinoceroses, etc. This region also shares few animals with the Palaearctic region which are wild horses, jerboas, and dormice.

Birds are very numerous. There are six families of birds that are endemic to this region. These are ostriches, secretary birds, helmet shrikes, mousebirds, hammerheads, and crested touracos.

The fish fauna of the Ethiopian region is diverse and consists of many primitive groups such as polypterus (Bichir), protopterus (lungfish), mormyrids, etc. There are two species of lungfish in the rivers and lakes of this region.

Affinities to other regions

It ranks second after the Neotropical region in having a great number of unique families of fauna. Ethiopian region shares some families like jerboas, wild horses with the Palaearctic region. It shares eight mammalian families with the Oriental regions such as lorises and monkeys.

It is because they all have tropic climatic conditions but their similarities are much stronger with the tropics of the Old-world than that of the New World.