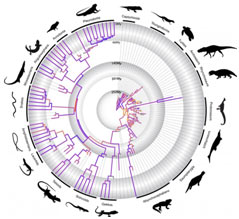 It is the measurement of the change over time in evolutionary lineage. It can be quantified as the speed of genetic or morphological changes, overtime in the lineage of life. Mathematically, calculated in terms of proportional change.

Long periods of stasis interrupted by brief periods of change are called the punctuated equilibrium model of evolution. It shows that evolution does not take place gradually. Biologists have observed such rapid evolutionary changes in small populations.

a. Stasis or equilibrium

The periods in which many species do not change significantly over millions of years are called stasis or equilibrium. Stabilizing selection takes place during periods of stasis.

The geologically brief period of change is called punctuates. Directional or disruptive selection occurs during periods of change. Stasis is interrupted by an ecological crisis. These ecological crises are generally changes in climate or major geological events.

Some variations are selectively neutral or disadvantageous. But these variations may be advantageous over the next 10,000 to 100, 000 years. New habitats are becoming available due to geological events. 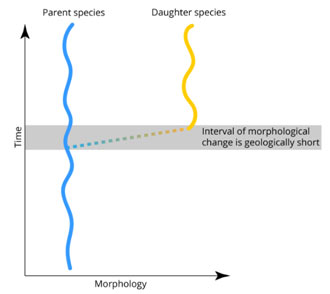 Events that occur in 10,000 to 100, 000 years are almost instantaneous in an evolutionary time frame. This geologically brief period of change is called punctuates as said previously. Then next period of stasis start.

Peter Grant studied finches for 20 years. He has shown that natural selection has caused rapid morphological changes in the bills of Galapagos finches. From the middle of 1976 to early 1978, there was long dry period. During this period, finches developed deeper bills.

Before this period, the birds consumed smaller easily cracked seeds. After this, they were forced to turn to larger seeds. Therefore, the birds with weaker bills were selected. Thus, measurable changes occur in the population of finch of the island Daphne Major.

The rapid pace of evolution causes jumps from one form to another.