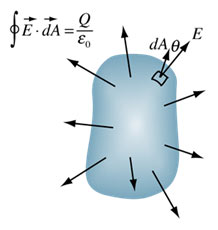 It is among the four equations of Maxwell’s laws of electromagnetism. It was initially formulated by Carl Friedrich Gauss in the year 1835 and relates the electric fields at the points on a closed surface area and the net charge enclosed by that surface. The law was released in 1867 as part of a collection of work by the popular German mathematician, Carl Friedrich Gauss.

Gauss Law states that the net electric flux out of a closed surface area is equal to the charge enclosed divided by the permittivity. The electric flux in an area is defined as the electric field multiplied by the area of the surface projected in a plane and perpendicular to the field.

According to the Gauss law, the overall flux linked with a closed surface area is 1/ ε0 times the charge confined by the closed surface.

For instance, a point charge q is positioned inside a cube of edge ‘a’. Now as per Gauss law, the flux through each face of the cube is q/6 ε0. The Gauss law formula is expressed by;