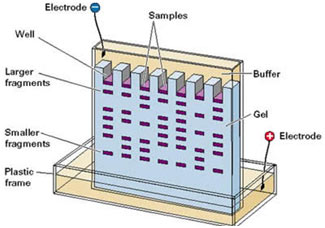 Electrophoresis is the essential physical laboratory technique of analysis of nucleic acids. It involves the compounds which can acquire electric charge in conducting electrodes. It is basically the movement of charged particles under the influence of an external electric field.

This technique is used for the separation and analysis of nucleic acids i.e., DNA, RNA, and for proteins. The separation is based on the size, charge, density, and purity of molecules.

This the separation or purification of proteins, DNA, and RNA that differ in charge, size, and conformation.

Charged molecules are placed at one end according to their charge and an electric field is applied. On passing current, they start migrating towards opposite electrode which can be either positive or negative electrode.

The size, shape, and charge of the molecule remain constant during electrophoresis and determines the mobility of ionic particles.

When voltage is applied large fragments move faster than small fragments. The charge is uniformly spread so the larger molecules will have more charged groups.

Power generated in most types of electrophoresis is dissipated as heat. This heat increases the rate of diffusion of sample and buffer ions thus broadening the sample separated.

Paper electrophoresis is one of the simplest approaches of electrophoresis. The sample is applied onto a point of a strip of filter paper such as Whatman no 1 and no 3 mm used that has been moisturized with a buffer solution.

Each end of the strip is then dipped into separate tanks consisting of the buffer solution and different electrodes (anode or cathode). An electric current is then used and the sample will then move towards the electrode with the opposite polarity. When the process is done, the strip is then dried and visualized with a detection system.

On application of potential difference at the ends of a strip, parts move at a rate determined by their electrophoretic mobility.

It is used in biochemical analysis. It has a downside that due to the existence of supporting medium, technical problems such as capillary movement, electro-osmosis, adsorption, and molecular sieving are introduced.

It is used for preparative scale purposes. The predetermined sample volume of 0.2 ml/min through the valve device is used continually on the center of the paper. Silica gel, powdered glass, sand, and agar gel can be used.

A potential difference of 500V is applied. Pure substances are collected in different containers, the solvent is evaporated and pure fractions are recycled. After complete electrophoresis, the filter is eliminated from the device and stained to locate the segregated components. 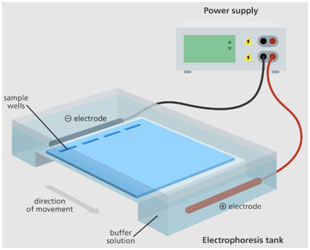 Agarose gel electrophoresis is often utilized to separate DNA or RNA fragments of different lengths. It involves the movement of negatively charged DNA or RNA particles from the negative electrode to the positive electrode. The particles are separated based on their molecular size.

Electrophoresis by polyacrylamide (likewise called PAGE) is usually used to separate proteins based upon the molecular size and charge-to-mass ratio. With the help of vertical pieces or gel incorporated in vertical rods or cylinders, researchers can separate DNA of 100 base pairs or less and analyze individual proteins in serum (e.g., genetic variants, isoenzymes).

Aside from its simplicity and speed of separation, it has the best advantage that the gels are stable over a vast range of pH and temperature, and gels of different pore sizes can be formed.

Pulsed-field gel electrophoresis is a method utilized for the separation of large DNA particles by applying to a gel matrix an electrical field that occasionally changes directions.

While in general little pieces can found their way through the gel matrix more easily than large DNA pieces, a limit length exists above 30– 50 kb where all large fragments will perform at the same rate, and appear in a gel as a single large diffuse band.

Nevertheless, with the regular altering of field directions, the various lengths of DNA respond to the change at differing rates. Over the course of time with the constant changing of directions, each band will begin to separate more and more even at huge lengths. Therefore, the separation of large DNA pieces utilizing PFGE is enabled.

The concept behind electrophoresis is that charged molecules will migrate towards the opposite pole and different from each other based upon physical characteristics.

Capillary electrophoresis has grown to become a collection of a series of separation strategies that involve the application of high voltages across buffer-filled capillaries to achieve separations.

Capillary electrophoresis is the method of performing electrophoresis in buffer-filled, narrow-bore capillaries, generally from 25 to 100 mm in internal size (ID). A high voltage (typically 10-30 kV) is used. Capillaries are typically of 50 μm inner diameter and 0.5 to 1 m in length. Due to electroosmotic flow, all sample elements move towards the negative electrode.

Routine electrophoresis is the traditional and most widely utilized scientific laboratory technology for separating proteins and nucleic acids.

This technique is normally carried out on a rectangular-shaped piece gel and is also called “zone electrophoresis” considering that it can accommodate a number of specimens and controls on one gel, and can be used to separate solutes in a single run.

It can likewise be utilized in separating CSF and urine proteins, isoenzymes, lipoproteins, and hemoglobin.