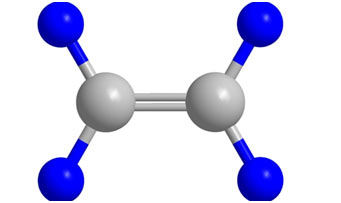 Alkenes are a homologous series of hydrocarbons that contain a carbon-carbon double bond. The variety of hydrogen atoms in an alkene is double the number of carbon atoms, so they have the general formulaCnH2n.

For instance, the molecular formula of ethene is C2H4, while for propene it is C3H6.

Alkenes are unsaturated, implying they consist of a double bond. Alkenes have two hydrogen atoms less than the corresponding saturated hydrocarbons (alkanes). They are likewise known as Olefins (derived from the Latin word olefiant meaning oil forming) due to the fact that lower members form oily products on treatment with chlorine or bromine.

The most basic olefin is C2H4, ethene. Alkene having one double bond are called mono-enes with general formula CnH2n. Alkenes consisting of two double bonds are called dienes.

Alkenes contain a double bond that is composed of one sigma and one pi bond in between two carbon atoms. The sigma bond has similar properties to those found in alkanes, while the pi bond is more reactive. The carbon atoms in the double bond are sp2 hybridized, forming a planar structure.

Rotation around the double bond is disfavored, so alkenes form fairly steady isomers depending on the positioning of substituents on the very same (cis) or opposite (trans) sides of the double bond. These isomers are called diastereomer isomers.

These double-bonded compounds are colorless and odorless in nature. However, ethene is an exception due to the fact that it is a colorless gas however has a faintly sweet smell.

The very first three members of the alkene group are gaseous in nature, the next fourteen members are liquids and the remaining alkenes are solids.

The alkenes are insoluble in water due to their nonpolar characteristics. However, are completely soluble in nonpolar solvents such as benzene, ligroin, etc.

The melting points of these double-bonded compounds rely on the positioning of the particles. The melting point of alkenes resembles that of alkanes. However, cis-isomer particles have a lower melting point than trans- isomers as the molecules are crammed in a U-bending shape.

Further Reading:  Measurement of e/m Value of Electron and Mass of Electron

Alkenes are weakly polar similar to alkanes however are slightly more reactive than alkanes due to the existence of double bonds.

The π electrons which make up the double bonds can quickly be removed or included as they are weakly held. For this reason, the dipole moments exhibited by alkenes are more than alkanes. The polarity relies on the functional group attached to the substances and the chemical structures.

Reactivity of a π -bond

In the formation of a π -bond, the partially filled π -orbitals overlap in a parallel style. The probability of finding an electron is hence far from the line joining the two nuclei. Due to this reason π -electrons are less strongly held between the nuclei. A π -bond is, therefore, a weak bond as compared to a σ -bond.

During a reaction, it breaks relatively easily rendering alkenes as a reactive group of compounds. Additionally, the loosely held π -electrons are more exposed to attack by the electrophilic reagents. Alkenes, therefore, undergo electrophilic reactions extremely easily.

Alkenes are incredibly essential in the manufacture of plastics. All plastics remain in some method related to alkenes. The names of some plastics (Polythene or Poly Ethene, Polypropene), resemble their alkene partners. Plastics are used for all types of jobs, from product packaging and wrapping to clothes and outdoor apparel.