An apparatus for recording and measuring spectra, particularly as an approach of analysis. A spectrometer is a scientific tool used to split light into an array of various colors, called a spectrum.

The capacity of spectroscopy to determine chemical make-up drove its innovation as well as continues to be one of its main uses. Spectrometers are utilized in astronomy to evaluate the chemical structure of stars, planets and collect information on the origin of space.

A spectroscope is a device that measures the spectrum of light. Early variations had a slit, a prism, as well as a display with markings to show different wavelengths or frequencies.

A spectrograph is an instrument that separates incoming light by its wavelength or frequency and documents the resulting spectrum in some sort of multichannel detector, like a photographic plate.

Lots of astronomical observations use telescopes as, essentially, spectrographs.

The role of the light source is to emit a continuous spectrum at a specific wavelength. The tungsten light is usually used in the visible range of 6 ~ 12V. In the near-ultraviolet area, a hydrogen lamp or deuterium lamp is used as the source of light.

The monochromator is the decomposition of the continuous spectrum given off by the source of light for monochromatic light, it is the core component of the spectrometer.

The dispersion capability of the monochromator is more powerful, the greater the resolution, the pure monochromatic light. The typical dispersion elements are prisms and gratings.

It consists of a fixed metal tube with a convex lens at one end and an adjustable slit at the other end. When the slit is at the focus of the convex lens, the rays of light coming out become parallel.

The function of the detector is to accept the transmitted light from the cuvette as well as transform it into electrical signals for measurement.

When measuring absorbance, it is measured by transforming the strength of light into an electrical current. This photoelectric converter is called a photoelectric detector.

The feature of a signal display system is to present or record an enhanced signal in the form of absorbance, A, or transmittance T. A basic spectrophotometric meter display device is frequently used galvanometer, microammeters, digital screen recorder. 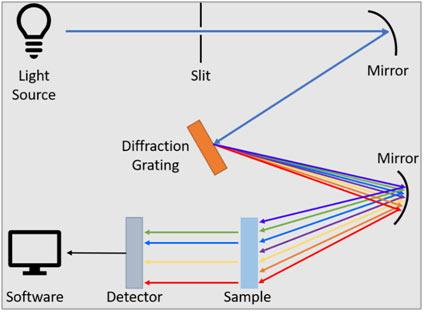 The grating separates the light into a beam of its component colors, similar to a prism. Spectrometers have a collimator that makes the light waves parallel and coherent, therefore making them a lot more focused.

This uses especially to spectrometers made use of in telescopes. The light after that shows onto a detector that gets specific wavelengths.