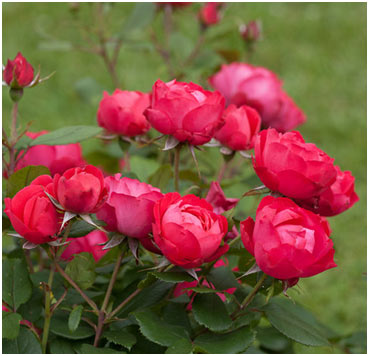 A family with about 100 genera and 2000 species is dispersed over the majority of the earth. In Pakistan, 29 genera and about 213 species are reported. About 50 genera are found in North America.

Plants are trees, shrubs, and herbs. The stem of the shrubby plants normally has spines. Leaves are alternate, rarely opposite, simple or compound, with paired stipules, which are often adnate to the petiole; spines may also occur on the rachis.

Herbaceous or woody, hard; the stem is covered with thorns (prickles). The inflorescence is variable, solitary, or might be a racemose or cymose cluster. Flowers are mostly bisexual, and actinomorphic, typically perigynous to some degree, usually showy and aromatic.

Sepals 5, gamosepalous, adnate to the receptacle; in some cases, epicalyx present; calyx tube remains free or adnate to the ovary, green, imbricate or valvate aestivation.

Petals 5, or multiples of 5, polypetalous, rosaceous, inserted on the receptacle cup otherwise colored; petals completely missing (Poterium, Alchemilla, Pygeumgardneria), or petals may be indefinite (Rosa spp.); sometimes stamens might be changed into petal-like structures; imbricate aestivation in the bud.

The gynoecium is of 1 to numerous separate carpels or variously unified, ovary usually superior often inferior;

Fruits: Achenes of hair follicles. pome or an etaerio of drupes or drupe.

Seed: The seed of the rose family is the non-endospermic seed.

The economic value of this family is great in offering satisfaction and welfare to mankind. The members of this family are important in temperate areas for fruit and ornamentals. Perhaps they rank third in commercial significance in the temperate zone among the families of flowering plants.

In Asian countries, the petals of common rose normally called gulabs are utilized in making gulkand, and are also used in the extraction of important oil (rose oil) used as a perfume, when distilled with water the petals give Rose-water or Ark-Gulab, which is used for treating eye illness, and for many other functions.