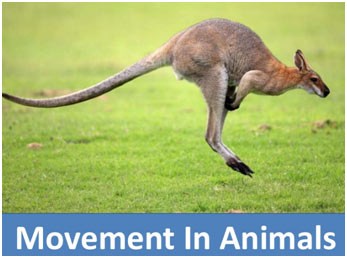 Animal locomotion, in ethology, is any of a variety of methods that animals utilize to move from one location to another. Some modes of locomotion are self-propelled, e.g., running, swimming, leaping, flying, hopping, soaring, and gliding. A few of the representative animals with their mobilities are following.

They increase amplitude and velocity. The activity note of the flagellum triggers the body of Euglena to turn forward about its axis. Euglena has the ability to change its direction by the active contractile myonemes which run along the length of its body. When they contract the shape of the body as well as its direction changes. First, the body becomes short and wider at the anterior end than in the center and later on at the posterior end. This particular movement is called Euglenoid motion.

Paramecium moves with the help of cilia. This is called the ciliary movement. All the cilia do not move simultaneously, a lot of cilia move in a progressive wave-like way at a time. The wave starts at the anterior end and advances backward. Cilia are short, fine thread-like extensions of the cell membrane. The length of cilia ranges from numerous microns to lots of hundred microns and the size varies from 0.1 to 0.5. µ.

A cilium consists of nine peripheral double fibrils, giving the appearance of an 8-shaped figure and two central smaller fibrils. All these fibrils run longitudinally through the cilium. These are covered with the extensions of the membrane.

As a result of bending and recovery strokes, the Paramecium swims against water the energy for the movement of cilia is provided from the ATP. The enzyme present in the cilia breaks up ATP to release energy.

The action of the cilia is coordinated and all the cilia beat together in a series to move the animal in one direction. In Amoeba movement occurs by means of pseudopodia. The pseudopodia are finger-like projections in the direction of flow of the cytoplasm consequently, the body moves in that direction. The specific system of formation of pseudopodia is still debatable.

Jellyfish has an umbrella-like body called bell. Firstly, water enters in the bell then the bell contracts, the water is propelled like a jet and the animal moves forward. This motion is called jet propulsion. Earthworm shows accordion-like movement, in which setae and muscles both are included. First of all, earthworm becomes long and thin. The setae present on the lower side of the anterior end come out, anchor, and hold this end firmly. The longitudinal muscles now contract and circular muscles relax and the body shortens thus pulling this portion forward. Then the setae of the posterior end come out and fix the animal on the ground. Now circular muscles contract, longitudinal muscles relax and the body ends up being thin and long. In this way, the earthworm relocates from one place to the other.

The mode of mobility in cockroaches is quick walking but it also requires light by its wings. In walking, the legs are used on one side, the foreleg pulls the body forward and the hind leg pushes it in the same direction. The middle leg of the opposite side functions as a prop.

In the meantime, the remaining three legs start to move together and the process is repeated. Out of the two sets, the posterior set of wings brings about the flight. These beat in the air in such a way that they support the body weight and drive it through the air. Snails and mussels are mollusks, which crawl or move extremely gradually by “foot”.

Starfish moves with the help of tube feet. The tube feet exist on both sides of the radial canal that extends up to the pointer of the arm. The tube feet extend when water is pumped into them, then they fix themselves by suction cup to some object. Later on, they become shorten and pull the body in this direction. In this way, the starfish moves in any direction. Arms of the starfish also help in swimming.