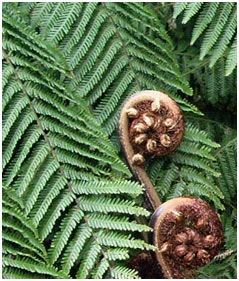 Tracheophytes are called vascular plants because of the existence of vascular tissues i.e., xylem and phloem. These are the successful group of land plants. They have the ability to adjust the rough land habitat most effectively and amongst them, the flowering plants today have a controlled land environment.

The development of the following complicated vegetative and reproductive qualities enabled the vascular plants in general and flowering plants specifically to become primary flora of land:

First Tracheophytes appear in the fossil record by 408 MYA. The vascular system enables plants to grow much bigger and taller than those without. Over time competitors causes the refinement of the vascular system. At some point in between 390MYA and 354MYA wood, true leaves, and advanced rooting systems were all developed.

In Psilopsida, plants have rootless sporophytes. The stem is differentiated into an underground root and an aerial part. Both are dichotomously branched. The root bears rhizoids, both carry out the function of the root. The aerial branches are green, leafless and bear small veinless outgrowths, and perform photosynthesis. The reproductive organs of sporophyte are sporangia which develop at the tips of long or short branches, or on lateral sides of branches. The internal structure of the stem is simple. Vascular tissue is narrow, central, and solid without pith, with a broad cortex. Psilopsida is considered to be the earliest group of vascular plants. The majority of the representatives of this group have actually ended up being extinct, for example, Horneophyton, Psilophyton, Cooksonia, and so on.

The gametophyte is thalloid. It is colorless and underground. Its cells consist of a fungus which supplies food to the gametophyte and in return gets protection from it. Such beneficial cooperative relationship among the two members (fungus and plant) is stated to be symbiosis; or mycorrhizal association.

The plants of Lycopsida have sporophytes differentiated into roots, stem, and true leaves. The leaves are small and single- veined, they are likewise called microphylls. The plan of leaves is spiral or opposite. The sporangia establish singly on the upper side of the sporophylls, which might or might not be set up to form strobili. The sporophyte might have sporangia of one kind as in Lycopodium or of two kinds i.e., microsporangia and megasporangia as in Selaginella. Lycopsids are likewise called club mosses/spike mosses because of their club/spike-shaped strobili and small leaves resembling mosses. On the basis of types of spores produced in the sporophyte, they are therefore referred to as being ‘homosporous’ or ‘heterosporous’ respectively.

This condition is called homospory and heterospory. Selaginella resembles seed-producing plants (spermatophytes) because of its heterosporic condition and some other characters. The gametophyte of Lycopsida is mainly underground.

In Sphenopsida (Horsetails), the sporophyte is differentiated into root, stem, and leaves. The leaves may be broadened or scale-like and are constantly arranged in whorls. Plants coming from this group are also called arthrophytes because the whole plant body is made up of a large number of joints.

The main stem is not smooth, it has a great number of ridges and furrows. Each node has a whorl of branches. The sporangia are born upon structures called sporangiophores, aggregated to form strobili. Each sporangiophore has a slender stalk and an expanded disc at its complimentary end. The sporangia appear on the underside of the disc. The thalloid gametophytes grow upon clayey soil and on mud, e.g., Equisetum. Pteropsida is divided into 3 classes (i) class Filicineae (ii) class Gymnospermae (iii) class Angiospermae. The class Filicineae consists of seedless plants with foliar sporangia (sporangia attached to fronds). The leaves are called fronds. When the frond is immature and young, it is coiled, this pattern of development is called circinate vernation. It is an important character of this group.