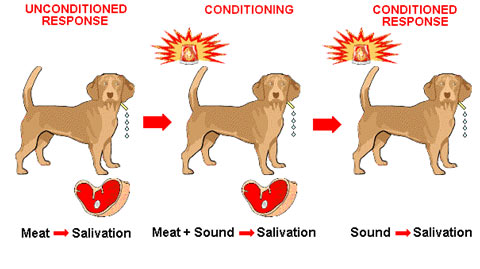 The process of changes in behaviors due to life experiences is called learning. Learning is an adaptive process that allows animals to respond quickly to changes in their environment.

Learning increases the behavioral changes of animals. The learning ability correlates with the certain characteristics of their surrounding environment. Some changes occur regularly in behavior that is certain and predictable.

Animal rapidly responds to a stimulus with instinctive behavior. An animal improves its response by learning to similar environmental changes.

There are different categories of learning. Starting from the simplest form that is habituation to the most complex one that is insight learning.

Learning is an adaptive function by which our nervous system changes in relation to stimuli in the environment, therefore altering our behavioral actions and permitting us to function in our environment. The procedure takes place initially in our nervous system in action to environmental stimuli. Neural pathways can be strengthened, pruned, activated, or rerouted, all of which cause modifications in our behavioral actions.

Instincts and reflexes are innate behaviors– they occur naturally and do not include learning. On the other hand, learning is a change in habits or knowledge that results from experience. The field of behavioral psychology focuses mostly on quantifiable behaviors that are learned, instead of trying to understand internal states such as emotions and mindsets.

Thorpe defined learning as that process that manifests itself by adaptive changes in individual behavior as a result of experience.

Imprinting is a kind of learning which is best understood in birds such as geese, ducks, and chickens, which are all precocial birds. Soon after hatching, ducklings and other young birds tend to follow moving items in their surroundings. They show a brief sensitive period throughout which the shape of a type of thing can be ‘inscribed’, with the result that the young birds will follow them.

Generally, naturally, the first moving object that comes across is the mother bird, and it is certainly adaptive for the young birds to learn her appearance and to follow her. However, if its parents are missing, a young bird might imprint on other types of birds, human beings, or inanimate things.

Habituation is the simplest type of learning and includes modification of behavior through a diminution of action to duplicated stimuli. A loss of receptivity to repetitive stimuli can be helpful in preventing a drain of energy and attention for unimportant functions. For examples:

3.Conditioning or conditioned reflex type I:

Conditioning or conditioned reflex type I involves the pairing of an irrelevant stimulus with a natural primary stimulus that elicits an automatic response. Pavlov conditioned the dogs to produce saliva on the ringing of the bell, which is not a typical stimulus for the secretion of saliva. In his experiments, he would ring the bell just before providing food to the dogs, so the dogs ended up being conditioned to a secondary stimulus or conditioned stimulus (ringing of a bell) and began secreting saliva in response to it as if it were the natural stimulus.

This kind of learning expands the capability of an organism to respond properly to environmental changes since the conditioning process removes reliance on one type of reflex symbol for action.

Operant conditioning or conditioned reflex type II (also called trial and error learning) is a more intricate kind of learning than habituation. This type of learning has actually been shown and studied by Thorndike and B.F. Skinner, a Harvard psychologist. Under natural conditions, the accomplishment of a specific objective is the benefit that directs random activities into a behavioral pattern.

Trial and error repetitions, step by step, lead to final achievement. Experiments on rats and cats were performed to run a maze to either get or find food or to press a lever and come out of the cage. In this case, the very first experience is unexpected and after that, it is rewarded, animal discovers with the latter experience.

Thorpe defined latent learning as the association of indifferent stimuli or situations without patent benefit. Suppose we put a rat in a maze as it wanders about and accidentally gets food. Did he find out anything before getting the food in the first experience? If we put the rat in the very same maze once again, it might straight reach the food. That implies when the rat was wandering, it did learn something without even the incentive of any benefit. Kohler performed numerous experiments on chimpanzees and revealed that they have a greater form of finding out called insight learning. Insight learning is an extreme case of behavioral modification including the application of insight or thinking to a unique circumstance. If an animal can direct its behavior to solve an issue for which it has no previous experience then the reasoning is involved.

Thinking in humans appears to include a recasting of an external circumstance in the creativity and control of the concepts to produce a solution that can be applied to circumstances. However, such insight or factor might be found in other primates. This is the highest type of learning.

For example, A chimpanzee is put in a cage in which an option piece of fruit hangs from the ceiling. This chimpanzee cannot reach the fruit; however, the keeper has placed some boxes of different sizes in the cage. After a brief duration of head-scratching, the chimpanzee moves the largest box and piles other smaller boxes over it and climbs to reach the fruits.