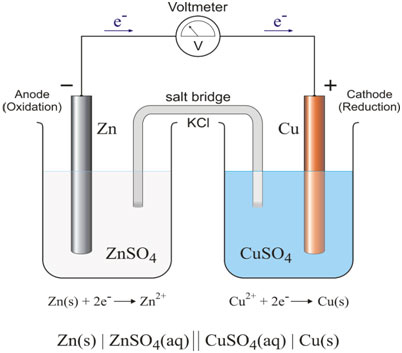 An electrochemical cell that converts the chemical energy of redox reactions into electrical energy is called a galvanic cell or a voltaic cell. The cell uses spontaneous redox reactions to create an electrical current. It consists of two separate half-cells. A half-cell is made up of an electrode (a strip of metal, M) within an option including Mn+ ions in which M is any approximate metal.

In oxidation-reduction reactions, electrons are moved from one species to another species. Energy is released if the reaction happens spontaneously. For that reason, the released energy is used to do helpful work. To tackle this energy, it is required to split the reaction into two different half-reactions viz. oxidation and reduction.

With the help of two various containers and wire, the reactions are taken into them to drive the electrons from one end to the other end. This produces a voltaic cell.

Working of Voltaic or Galvanic Cell

A voltaic or a galvanic cell consists of two half-cells that are electrically connected. Each half cell is a portion of the total cell in which a half-reaction occurs. The left half-cell consists of a strip of zinc metal dipped in 1.0 M solution of zinc sulfate providing the following balance:

The right half-cell is a copper metal strip that dips into 1.0 M copper sulfate solution and the equilibrium here is represented as follows:

These half-cells are connected electrically by a salt bridge. If the solutions were to blend, direct chemical reactions would occur, destroying the half-cells. The salt bridge contains a liquid solution of potassium chloride in a gel. Zinc tends to lose electrons quicker than copper. This voltaic cell can be represented as follows;

The signǁrepresents the salt bridge.

The function of Salt Bridge

Considering that, zinc ions are produced as electrons leave the anode, we have a process that tends to produce a net positive charge in the left beaker. Actually, the concentration of Zn2+ ions increases in the left beaker. Likewise, the arrival of the electrons at the copper cathode and their reaction with copper ions tend to produce a net negative charge in the right beaker.

The purpose of the salt bridge is to prevent any net charge accumulation in either beaker by allowing negative ions to leave the right beaker, diffuse through the bridge and get in the left beaker. If this diffusional exchange of ions does not happen, the net charge building up in the beakers would instantly stop the flow of electrons through the external circuit and the oxidation-reduction reaction would stop.

Lots of other oxidation-reduction reactions can be carried out effectively in galvanic cells using different electrodes. It is natural to consider these cell procedures as separated into 2 half-reactions which occur at the two electrodes. In a voltaic cell, the electric current in the external circuit can be utilized to light a bulb, drive a motor, and so on.

On the other hand, if the external circuit is replaced by a source of electricity that opposes the voltaic cell, the electrode reactions can be reversed. Now, the external source presses the electrons in the opposite direction and provides energy or work to the cell so that the reverse nonspontaneous reaction occurs. Such, a cell is called a reversible cell. For the zinc-copper cell, the half-cell reactions are reversed to give.

and the overall reaction is reversed, ends up being