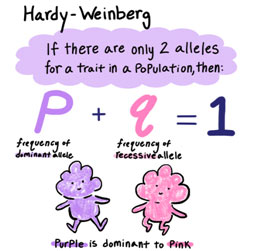 Hardy-Weinberg theorem, an algebraic formula that describes the hereditary equilibrium within a population. Hardy-Weinberg theorem is named for the two scientists Wilhelm Weinberg, a German physician, and Godfrey Harold Hardy, a British mathematician, who derived the principle independently in 1908.

A population is a localized group of individuals belonging to the same species. For now, we will define a species as a group of populations that have the possibility to interbreed in nature. Each species has a geographical variety within which individuals are not expanded evenly, but are usually concentrated in several localized populations.

For that reason, individuals near a population center are, on average, more closely related to one another than to members of other populations.

The total aggregate of genes in a population at any one time is called the population’s gene pool. It includes all alleles at all gene loci in all individuals of the population. For a diploid species, each locus is represented twice in the genome of an individual, who might be either homozygous or heterozygous.

If all members of a population are homozygous for the same allele, that allele is stated to be fixed in the gene pool. More frequently, there are two or more alleles for a gene, each having a relative frequency (percentage) in the gene pool.

Let us consider an example.

Imagine a wildflower population with 2 varieties contrasting in flower color. An allele for pink flowers, which we will symbolize by A, is entirely dominant over an allele for white flowers, represented by a. Suppose these are the only two alleles for this locus in the population. Our imaginary population has 500 plants.

Twenty have white flowers since they are homozygous for the recessive allele; their genotype is aa. Of the 480 plants with pink flowers, 320 are homozygous (AA) and 160 are heterozygous (Aa). Since these are diploid organisms, there is an overall of 1000 copies of genes for flower color in the population.

And since there are only two allelic kinds of the gene, the allele must have a frequency of 20%, or 0.2. Related to these allele frequencies are the frequencies of genotypes. In our model wildflower population, these frequencies are: 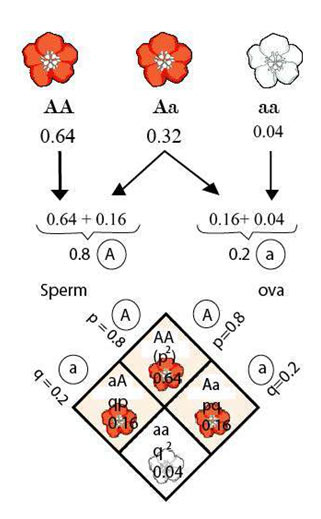 The frequencies of genotypes of non-evolving populations are explained by Hardy- Weinberg theorem.

“It states that the frequencies of alleles and genotypes in a population’s gene pool remain constant over the generations unless acted upon by agents other than sexual recombination. So, shuffling of alleles due to meiosis and random fertilization has no effect on the overall genetic structure of a population.”

A general equation called the Hardy- Weinberg equation is used for computing the frequencies of alleles and genotypes in populations at equilibrium.

The frequency of individuals homozygous for the other allele aa is q2, or 0.2 x0.2= 0.04 for the wildflower population. There are two ways in which an Aa genotype can arise, depending upon which parent contributes the dominant allele. For that reason, the frequency of heterozygous individuals in the population is 2Pq (2×0.8 x0.2= 0.32, in our example). If we have actually calculated the frequencies of all possible genotypes properly, they ought to amount to 1:

For our wildflowers, this is.

In fact, the Hardy-Weinbergtheorem is a binomial expansion.

Lots of factors can change gene frequency. Out of these five affect the proportion of homozygotes and heterozygotes enough to produce significant variances from the percentage claimed by the Hardy Weinberg principle. They are as follows.

The ultimate source of all modifications and changes; individual mutations occur so hardly ever that mutation alone does not change allele frequency much.

A really powerful representative of change, migration locally acts to prevent evolutionary changes by avoiding populations that exchange members from diverging from one another. Emigration and migration of members of a population, cause disruption in the gene pool.

It is the change in frequency of alleles at a locus that happens by chance. In small populations, such fluctuations may lead to the loss of particular alleles. This may happen in a little population when a few individuals fail to reproduce and after that genes are lost from the population.

Inbreeding is the most typical kind; it does not alter allele frequency, however, reduces the percentage of heterozygous individuals. Individuals with particular genotypes often mate with one another more commonly than would be anticipated on a random basis. This is called non-random mating, causing the frequencies of specific genotypes to differ significantly from those forecasted by the Hardy- Weinberg principle.