Plate Tectonic theory states that the Earth’s hard outer crust, the lithosphere, is divided into plates that move over the asthenosphere, the molten top portion of the mantle. Oceanic and continental plates come together, spread apart, as well as interact at borders all over the world.

After Alfred Wegener’s theory of continental drift, great advances were made in geophysical techniques that allowed the mapping of ocean floors, measurement of Earth’s magnetic field, gathering and recording seismic data, etc.

In 1966, these developments in geophysical techniques led to the introduction of concept of Plate Tectonics. This concept was formulated by Canadian Geophysicists named J. Tuzo Wilson in 1966. It can be said that this theory is the scientific mechanism of continental drift theory proposed by Wegener.

From the inmost sea trench to the huge mountain, plate tectonics describes the attributes and movement of the Planet’s surface area in the present and the past. Plate tectonics is the theory that Earth’s external shell is split right into huge slabs of solid rock, called “plates,” that slide over Earth’s mantle, the rocky inner layer above Earth’s core. 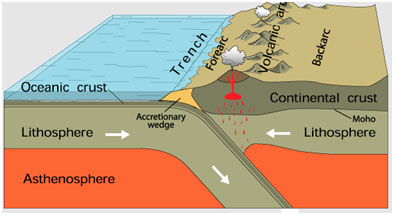 Earth’s solid external layer, which includes the crust and also the uppermost mantle, is called the lithosphere. It is 100 km (60 miles) thick. There lies the heavier and hot material known as the Asthenosphere below the lithosphere.

The rigid, lighter, and outer lithosphere is supported below by the more plastic and heavier material of the asthenosphere. The thickness of plates in oceans varies from 50 – 100 km. By contrast, continental blocks are 100 km thick and, in some regions, may exceed 150 km.

Another basic principle is that each plate moves as a single independent unit. The mobile and plastic nature of the mantle is believed to facilitate this motion while the push is provided by the accretion of material to plate at the mid-oceanic ridges.

Meanwhile, geologists imagine the plates over this roiling mantle as bumper vehicles; they consistently collide, stick, after that tear apart. Geologists describe the places where segments met and also divide as plate boundaries. They’re believed to wrap around the Earth like seams on a baseball.

Since all plates move distinctly as a unit, all the interactions occur at plate boundaries. The large-scale structural features of the Earth such as continents, basins, islands arcs, trenches, mountain belts, etc. all are thought to be produced as a result of interactions between plates along dynamic margins.

Plate boundaries are the edges where two plates meet. Most geologic activities, including volcanoes, earthquakes, and hill building, occur at plate boundaries. 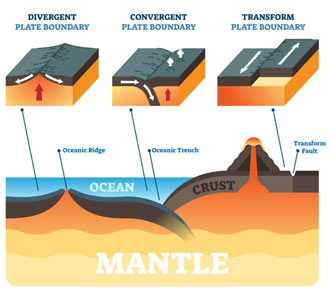 The movement of two plates in opposite directions collide along the margins i.e., one plate subducts under the other and the lower plate may be absorbed in the mantle. The boundary where plates are being destroyed is called the convergent boundary.

Three convergent boundaries are present, all of them somehow including a subduction area. In the continent-continent collision, the subduction zone has currently vanished however can be seen below the surface area.

Subduction areas create lots of igneous lava that rises to the surface area to form volcanic mountains (volcanic arcs; island arcs). At convergent boundaries, the oceanic lithosphere is constantly damaged by coming down into a subduction area. This is because the nautical rock is heavy, contrasted to the continents, and also sinks conveniently.

Plates relocate apart at mid-ocean ridges where new ocean floor forms. Between the two plates is a rift valley. Lava streams at the surface area great rapidly to become lava, yet deeper in the crust, the lava cools down extra gradually to form gabbro.

So, the entire ridge system is made up of igneous rock that is either extrusive or invasive. Earthquakes are common at mid-ocean ridges because the motion of magma, as well as nautical crust, leads to crustal trembling. The substantial majority of mid-ocean ridges are located deep beneath the sea.