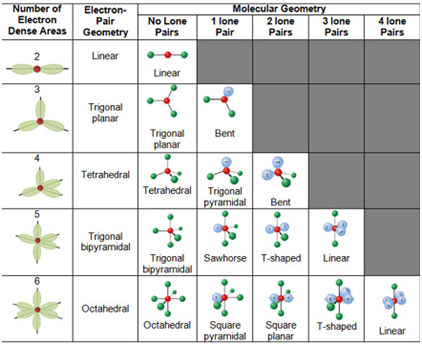 What is the VSEPR Theory?

The Valence Shell Electron Pair Repulsion Theory is often shortened as VSEPR (pronounced “vesper”). It is generally a theory to anticipate the geometry of molecules. Particularly, the VSEPR theory looks at the bonding and molecular geometry of organic molecules and polyatomic ions. It is useful for nearly all substances that have a central atom that is not a metal.

The valence electron pairs (lone pairs and the bond pairs) are set up around the central atom to remain at a maximum range apart to keep repulsions at a minimum.

The magnitude of repulsions between the electron sets in an offered molecule decreases in the following order:

Shapes of Molecules According to VSEPR Theory

In such, molecules two electrons, pairs around the central atom are set up at farther range apart at an angle of 180 °, in order to lessen repulsions between them. Therefore, they form a linear geometry.

(a) AB3 Type with no Lone Pairs

In such molecules, the central atom includes three bonding electron pairs, which are organized at a maximum distance apart at a shared angle of 120 °, providing a triangular planar geometry. The boron atom in BH3 is surrounded by three charge clouds, which remain farthest apart in one plane, each pointing towards the corners of an equilateral triangle.

Therefore, BH3, molecules have a trigonal planar geometry, with each H- B-H bond angles of 120 °. We expect similar geometries in hydrides of group III-A (AlH3, GaH3, InH3, and TlH3) and their halides (BF3, AlCl3, and so on).

(b) AB3-Type with One Lone Pair and Two Bond Pairs

In SnCl2, one of the corners of the triangle is inhabited by a lone pair, giving rise to a distorted triangular structure in vapor phase. 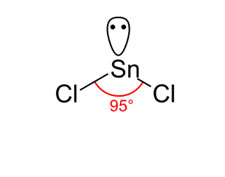 In SO2, one corner of the triangle is occupied by a lone pair and two corners each by S =O double bond, while in SO3 all 3 corners, each is occupied by S = O bonds. This structure of SO3 is completely triangular.

(a) AB4 Type with no Lone Pairs

The charge clouds due to 4 electron pairs avoid their electrostatic repulsions by drifting apart, so to preserve a mutual bond angle of 109.5 °. Such geometry makes it possible for a kinda shape of the regular tetrahedron.

Each of the four valence electrons of carbon pair up with the sole electron of hydrogen in methane.

The 4 electron pairs are directed from the center towards the corners of a regular tetrahedron, with each apex representing a hydrogen nucleus. The arrangement permits a non-planar plane of electron pairs. Each H-C-H bond is perfectly 109.5 °. On the very same premises, SiH4, GeH4, CCl4 type similar geometries. This structure has 4 corners, four faces, six edges, and six bond angles.

(b) AB4 – Type with One Lone Pair and Three Bond Pairs

Ammonia, NH3 is a common example in this case.

The non-bonding electron in 2s orbital uses up more space and exerts a strong repulsive force on the bonding electron pairs. Consequently, to avoid a larger repulsion, the bonding electron pairs move closer that minimizes the ideal bond angle from 109.50 to 107.5 °. This effect forces ammonia to assume a triangular pyramidal geometry instead of a tetrahedral, as in methane. Similar, effects are evident in the geometries of molecules like PH3, AsH3, SbH3, and BiH3.

The substitution of hydrogen with electronegative atoms like F or Cl further decreases the bond angle.

In NF3, the strong polarity of the N-F bond pulls the lone pair of N atom closer to its nucleus, which in turn puts in a stronger repulsion over bonding electrons. Hence, the angle further diminishes to 102 °. Furthermore, the bond pairs N-F bonds are nearer to F atoms than N atoms. The increased distances in these bond sets make their repulsions less operative. 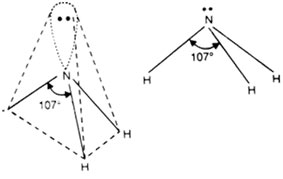 But speculative proofs confirm a bent or angular geometry. VSEPR theory, effectively justifies the speculative results by arguing the participation of lone pairs, in addition to bond pairs in figuring out the general geometry of water molecules.

2 of the corners of a tetrahedron are inhabited by each of the two lone pairs and staying by bond pairs. But owing to the spatial arrangement of lone pairs and their repulsive action among themselves and on bond pairs, the bond angle is further decreased to 104.5 °. H2S, H2Se, H2Te have similar geometries.