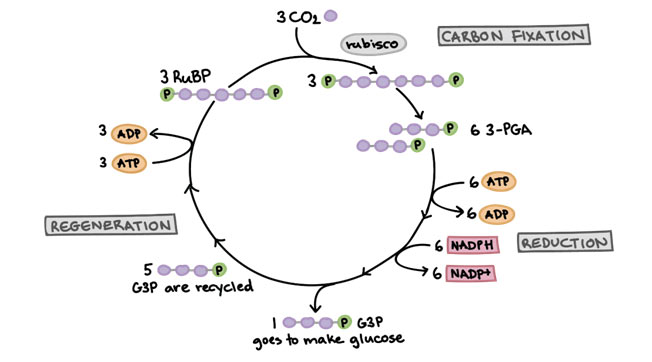 The dark reactions occur in the stroma of the chloroplast. These reactions do not need light directly and can happen in the existence or absence of light provided the assimilatory power in the form of ATP and NADPH, produced during light reactions is available. The energy of these substances is utilized in the formation of carbohydrates from CO2, and hence stored in them.

The details of the path of carbon in these reactions were found by Melvin Calvin and his co-workers at the University of California. Calvin was granted Nobel Prize in 1961.

The cyclic series of reactions, catalyzed by particular enzymes, by which the carbon is fixed and reduced resulting in the synthesis of sugar during the dark reactions of photosynthesis is called Calvin Cycle. The Calvin cycle can be divided into three stages: Carbon fixation, Reduction, and Regeneration of CO2 acceptor (RuBP).

Carbon fixation describes the initial incorporation of CO2 into organic material. Keep in mind that we are following 3 molecules of CO2 through the reaction (because 3 molecules of CO2 are needed to produce one molecule of carbohydrate, a triose).

The product of this reaction is an extremely unsteady, 6 – carbon intermediate that instantly breaks into two molecules of 3 – carbon compound called 3 -phosphoglycerate (phosphoglyceric acid – PGA). The carbon that was originally part of CO2molecule is now a part of an organic molecule; the carbon has actually been “fixed”. Since the product of initial carbon fixation is a 3 – carbon compound, the Calvin cycle is also called the C3 pathway.

G3P is the same three-carbon sugar which is formed in glycolysis (first stage of cellular respiration) by the splitting of glucose. In this way fixed carbon is reduced to energy-rich G3P with the energy and reducing the power of ATP and NADPH (both the products of light-dependent reactions), having the energy stored in it. Actually, G3P, and not glucose, is the carbohydrate produced straight from the Calvin cycle.

For every 3 molecules of CO2 going into the cycle and integrating with 3 molecules of five-carbon RuBP, six molecules of G3P (including 18 carbon in all) are produced. However, only one molecule of G3P can be counted as a net gain of carbohydrates.

Out of every 6 particles of G3P formed, only one particle leaves the cycle to be utilized by the plant for making glucose, sucrose starch or other carbohydrates, and other natural compounds; the other five molecules are recycled to restore the three molecules of five-carbon RuBP, the CO2 acceptor.