The concept of the operon was presented by Jacob and Monod in 1961. In microorganisms and archaea bacteria, structural proteins with associated features are usually inscribed together within the genome in a block called an operon.

Operon is defined as a segment of a DNA strand including:

A cluster of several structural genes, which carries the codons which can be translated into proteins.

One operator gene has overall control over the process of translation.

A third gene called the regulator gene lies often at a distance from the operator gene on the same strand of DNA. Regulator gene transcribes m-RNA which synthesizes “repressor protein” molecules that control the transcription.

It is situated in between the operator gene and regulator gene. 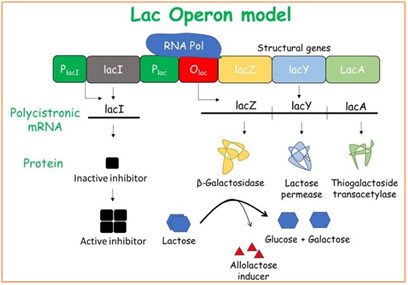 The “lac operon” is an inducible catabolic operon of E. coli. It consists of:

It has three structural genes ‘Z’, ‘Y’, and ‘A’. Code respectively for “β-galactosidase”, “galactoside permease” and “thiogalactoside transacetylase”.

The structural genes Z, Y, and A transcribe to create a single huge m-RNA with 3 independent translation units for the synthesis of the 3 distinctive enzymes. Such an m-RNA coding for more than one protein is called “polycistronic m-RNA” which is characteristic in prokaryotes.

Negative Control of the lac Operon

Expression of the lacI gene is not managed as well as very reduced degrees of the lac repressor are continuously manufactured. Genes whose expression is not regulated are called constitutive genes.

In the absence of lactose, the lac repressor blocks the expression of the lac operon by binding to the DNA at a site, called the operator that is downstream of the promoter and also upstream of the transcriptional initiation site.

The operator contains a specific nucleotide series that is acknowledged by the repressor which binds extremely tightly, physically blocking (suffocating) the initiation of transcription.

Positive Control of the lac Operon

Glucose is really easily metabolized so is the preferred fuel source over lactose, hence it makes sense to avoid the expression of lac operon when glucose exists. 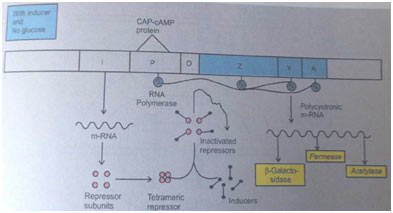 Catabolite gene activator protein is a dimer that serves as a positive regulator of lots of catabolic operons like the “lac operon” in E. coli. Accessory of “RNA polymerase” to the promotor site needs the presence of CAP bound to cAMP.

The absence of glucose in the cell activates “adenylate cyclase” which catalyzes the synthesis of cAMP from ATP. The later binds to CAP to create a “CAP – Camp complex”. Unlike free CAP, this complicated binds to the promotor site immediately.

This boosts the initiation of transcription of the “Lac operon” structural genes in the lack of repressors. The binding of the “CAP-cAMP complex” to promotor improves “RNA polymerase” activity.

On the other hand, the presence of glucose lowers the intracellular cAMP. Because of decreased levels of cAMP, the development of “CAP-cAMP complex” to p-site is negligible and the transcription does not happen. Hence, sugar disrupts the expression of “Lac operon” by depleting the cAMP level.