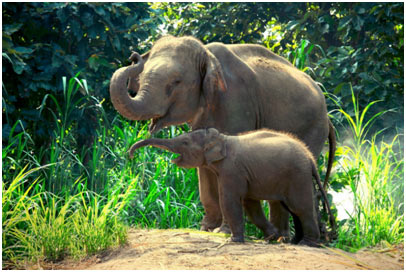 Wildlife management is a vital branch of conservation that is mainly concerned with the three ‘Ps’ i.e., preservation, protection, perpetuation and percipient control of rare species of plants and animals.

The three general approaches that are mainly adapted towards wildlife management are laws restricting the numbers killed, artificial stocking and the protection and improvement of habitats.

Habitat preservation is the most important one. If the habitats are destroyed or drastically altered, protective laws and artificial stocking are useless.

So, the establishment of sanctuaries and game reserves in order to provide protection to a species of plants and animals of rare, threatened or endangered species is crucial.

There are different meanings of wildlife; some believe that wildlife just consists of game species (huntable types). Others that wildlife includes only birds and mammals. And even others that believe it even includes all plants, vertebrates, and invertebrates.

However, the clearest definition is that wildlife consists of all terrestrial and marine vertebrates but not domesticated animals like family pets and animals. This includes game species, non-game species, feral animals, invasive/exotic, and native species.

Management is when human beings come into the picture and apply “controls” to the environment, making decisions based upon the existing circumstance. These decisions can be either active or inactive. For that reason, wildlife management is the control between the connection of wildlife populations and the environment the animals live in.

Wildlife management is interdisciplinary that handles protecting endangered and threatened species and subspecies and their habitats, along with the non-threatened agricultural animals and game species. The Wildlife Management program highlights both applied and basic research in wildlife ecology, management, education, and extension. Wildlife management takes into account the eco-friendly principles such as bring the capacity of the habitat, conservation, and control of habitat, reforestation, predator control, reintroduction of extinct species, capture and reallocation of abundant species, and management of “preferable” or “unfavorable” species.

There are 2 basic types of wildlife management:

Custodial management is preventive or protective and reduces external influences on the population and its habitat. It is done by setting up national parks where environmental conditions are safeguarded and threatened species are conserved by law.

Environment management is the main tool wildlife biologists use to handle, safeguard, and improve wildlife populations. Increased wildlife variety in an area may be a wildlife management objective. It is hard to develop techniques for handling each species independently. A number of wildlife species can benefit when a total environment is enhanced or preserved intact to fulfill the requirements of endangered or threatened species or groups of species.

Endangered or threatened species require intensive management. Crucial environments and places of existing populations need to be recognized so they can be managed effectively. An animal species is considered endangered when its numbers ended up being so low that professionals think it may become extinct unless action is taken to preserve it.

Threatened species’ populations are showing indications of unnatural decline or they are susceptible to become endangered. Lots of threatened or endangered species are those that have really limiting habitat needs and eat specialized foods. The leading cause for a species becoming endangered or threatened is habitat loss.

Another wildlife management objective may be to re-establish species in appropriate habitats. The lost species can be reintroduced from other locations once again in reintroduction programs and management efforts. The research study of the biology and environmental requirements of the species is essential before the introduction.

Gamekeeping is the management or control of wildlife for the wellbeing of the game and might consist of eliminating other animals which share the exact same specific niche or predators to maintain a high population of the more successful species, such as pheasants presented into woodland.

Wildlife management is crucial not just for animals found in the location but for the human species and our natural resources. As our species expands and takes a growing number of lands, we must also secure natural deposits and the animals whose habitats surround us. Wildlife management works to keep all parties safe, this is through rules and regulations for individuals, and the care and monitoring of the wildlife, all in the efforts to keep all species safe.

Wildlife conservation aims to halt the loss of the Earth’s biodiversity by considering environmental principles such as carrying capacity, disruption, and succession and environmental conditions such as physical geography, pedology, and hydrology with the objective of balancing the requirements of wildlife with the requirements of humans. A lot of wildlife biologists are interested in the conservation and enhancement of environments although rewilding is increasingly being used.