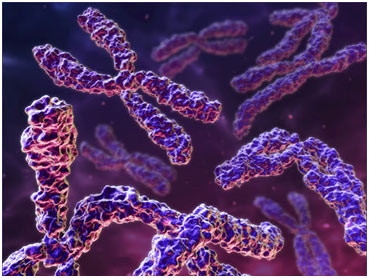 The chromosome is a thread-like structure resulting from the organization of chromatin materials during cell division. Under the microscope, they appear to be made of arms (chromatids) and a centromere.

A centromere is a place where chromosome and kinetochore attach with spindle fibres during cell division.

The DNA is organized with proteins to form chromosomes. The chromosomes condense before the cell division and become thick. Now they can be seen as separate structures.

Each eukaryotic species has a characteristic number of chromosomes. A human cell has 46 chromosomes in its nucleus. But the gametes – egg and sperm have only 23 chromosomes in humans.

Chromosomes are thread-like structures present in the nucleus, which brings hereditary information from one generation to another. They play an important role in cellular division, heredity, variation, repair, regeneration and mutation.

In Eukaryotic cells, the genetic product exists in the nucleus in chromosomes, which is made up of extremely organized DNA molecules with histone proteins supporting its structure. Chromosome implies ‘coloured body’, that describes its staining capability by particular dyes.

Karl Nägeli in 1842, very first observed the rod-like structure present in the nucleus of the plant cell. W. Waldeyer in 1888 coined the term ‘chromosome’.

Walter Sutton and Theodor Boveri in 1902 recommended that chromosomes are the physical carrier of genes in the eukaryotic cells. The number of human chromosomes was published in 1923 by Theophilus Painter. By inspection through the microscopic lens, he counted 24 sets, which would indicate 48 chromosomes. His mistake was copied by others and it was not until 1956 that the true number, 46, was identified by Indonesia-born cytogeneticist Joe Hin Tjio. Karyotyping is a technique to study the structure of chromosomes present in a species. Chromosomes are separated, stained and photographed. This strategy is useful in finding out any chromosomal abnormalities.

Each cell has a set of each kind of chromosome called a homologous chromosome. Chromosomes are made up of chromatin, which contains a single molecule of DNA and associated proteins. Each chromosome includes hundreds and thousands of genes that can specifically code for a number of proteins in the cell. Structure of a chromosome can be best seen throughout the cellular division.

Main parts of chromosomes are:

Centromere divides the chromosome into 2 parts, the much shorter arm is called ‘p’ arm and the longer arm is known as ‘q’ arm. The centromere includes a disc-shaped kinetochore, which has specific DNA sequence with special proteins bound to them. The kinetochore supplies the centre for polymerization of tubulin proteins and assembly of microtubules.

Further Reading:  Diseases due to Viruses

Telomere: Terminal part of a chromosome is referred to as a telomere. Telomeres are polar, which prevents the fusion of chromosomal sections.

Satellite: It is an extended segment that is sometimes present on a chromosome at the secondary constriction. The chromosomes with satellite are called sat-chromosome. It contains securely loaded DNA, which is genetically non-active. The light stained; diffused area of chromatin is called euchromatin. It contains genetically active and loosely packed DNA. At prophase, the chromosomal material is visible as thin filaments referred to as chromonemata. At interphase, bead-like structures are visible, which are an accumulation of chromatin material called chromomere. Chromatin with chromomere appears like a string with beads.

B.On the Basis of Number of Centromeres

Diffused or non-located with indistinct centromere diffused throughout the length of the chromosome.

C.On the Basis of Area of Centromere

Function and Significance of Chromosomes

The number of chromosomes is constant for a particular species. Therefore, these are of great importance in the determination of the phylogeny and taxonomy of the species.

Chromosome includes the genetic product that is needed by the organism to develop and grow. DNA particles are made from a chain of systems called genes. Genes are those sections of the DNA which code for specific proteins required by the cell for its appropriate performance. Chromosomes check successful division of cells throughout the procedure of mitosis. The chromosomes of the parent cells ensure that the right information is passed on to the child cells needed by the cell to grow and develop correctly.

The chromosomes instruct the sequences of proteins formed in our body and also keep the order of DNA. The proteins are likewise kept in the coiled structure of the chromosomes. These proteins bound to the DNA assistance in proper packaging of the DNA.