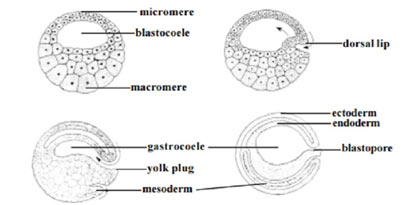 Gastrulation is the most important event in the (beginning of) life. It is the characteristic event that occurs during the third week of gestation. It is the embryonic development that changes hollow ball of cells; a blastula having a cavity in middle called blastocoel, into a three-layered gastrula.

The term gastrulation is derived from the Greek word “gaster” which means stomach or gut. These are the morphogenetic processes that rearrange the embryo into a three-layered gastrula.

The three primary germ layers are Ectoderm, Mesoderm, and Endoderm.

The outermost layer forms the epidermis or skin, nervous system and cornea, and lens of eyes.

Endoderm forms the lining of digestive, reproductive, respiratory tracts. It also leads to the formation of the liver and pancreas.

The primitive streak at first forms through a thickening of cells near the connecting stalk. As cells proliferate and move towards the midline of the embryo, the thickening extends to become linear, therefore termed primitive steak.

As the primitive streak and pit lengthen, migrating epiblast cells join the streak at the cranial end, forming a mass of cells called the primitive node, which ends up being the main tissue organizer where transcription elements and chemical signaling drive induction of tissue development.

Types of Cell Movements in Gastrulation

Gastrulation is a flux in embryos. There are complex series of cell movements. Cells rearrange themselves and find new neighbors, suitable environments and change the shape of the embryo. Following types of cytoskeletal events drive gastrulation.

It is in the folding of region cells at the vegetal pole. The sheet of epithelial cells moves inward from the surface and forms a tube-like cavity. The movement is invagination if the central cavity of the tube is formed by apical epithelium cells. If basal epithelium forms central cavity, then it will be termed evagination.

The in turning of an expanding outer layer of cells. Cells roll inward to form a layer of tissues with bulk movements.

Migration of individual cells from the surface to the interior is ingression. For this purpose, many changes occur in the extracellular matrix, changes in cell adhesion molecules also take place. Basically, it is driven by cell adhesion.

The movement of cells between each other to form a row or array of cells. This occurs as a result of cell enlargement.

The complex series of movements including intercalation. A sheet of cells is formed covering the surface as an outcome of changes in the shape of cells.

The type of cell intercalation in which two or more rows of cells elongate and intercalate to make wide tissue into narrow-long tissue. They converge by intercalating at the right angle to the axis.

Splitting up one sheet of cells into two is called delamination.