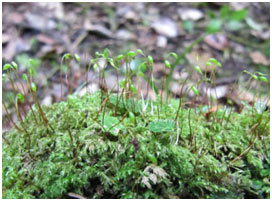 For the sake of convenience organisms included in Plantae can be divided into two broad classifications viz. nonvascular (Bryophyta) and vascular (Tracheophyta) plants. Although this grouping is not according to any specific system of classification however it does reflect resemblances and dissimilarities amongst numerous groups of plants. Each classification (division) is divided into Subdivisions, Classes, Subclasses, and other taxonomic ranks.

In this article, you will learn about the division Bryophyta.

The very first plants to colonize land were the bryophytes. They are typically thought to have actually developed from green algae. The Bryophytes are poorly adapted to reside on land and are generally confined to damp shady locations. These plants are devoid of specialized conducting (xylem and phloem) and strengthening tissues.

Just the process of diffusion and osmosis assists in the transport of water and minerals as well as in the transport of prepared food and other substances. The plant body is with a proper cuticle or has a very thin one. The water is taken in by the basic surface of the plant. The bryophytes are stated to be the amphibians of the plant world due to the fact that they cannot live far from water. They need water for reproduction.

Fertilization takes place in water. Antherozoids (n) are drawn in towards archegonia (n) chemotactically. A single antherozoid fuse with an egg (n) thus accomplishing fertilization which leads to the development of the diploid zygote (2n). The zygote is kept within the female sex organ (archegonium) for a long time. After a resting period, the zygote establishes through mitotic divisions into a diploid embryo. The embryo ultimately becomes a sporophyte which is likewise diploid.

The entire development of sporophyte thus takes place within the gametophyte plant body. Even when the sporophyte is completely developed it remains attached to the gametophyte for nourishment and protection because it does not consist of chloroplasts and is unable to perform photosynthesis. In general, bryophytes established the following adaptive characters for the terrestrial environment: