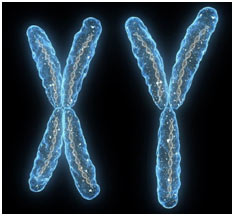 The chromosomes which determine the sex in different organisms are called sex chromosomes. This term refers to the process that enables species to exchange genetic material between homologous chromosomes.

This produces recombination which is necessary for reproduction and important genetic changes in next generations.

There are three mechanisms for sex determination of different organisms:

The sex-determining mechanism in which sex is determined by the X chromosome only is called the XO mechanism. Grasshoppers and protenor bugs follow this mechanism.

Let us the case example of protenor bug.

Male protenor bug has 13 chromosomes in diploid cells. It has 6 pairs of autosomes but only one X chromosome. So, it is XO. The other sex chromosome is entirely missing. Thus, the male is heterogametic and produces two types of sperms. 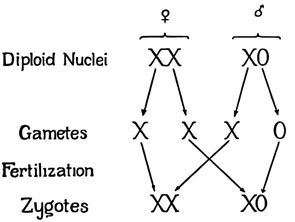 The female protenor bug has 14 chromosomes in diploid cells. The female has 6 pairs of autosomes and two X chromosomes. Thus, it is XX. It forms only one type of eggs. So, the female bug is homogametic. 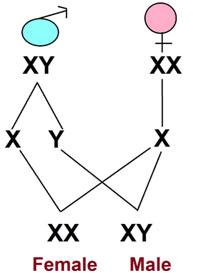 The pattern which determines the sex by X and Y chromosomes is called the XY mechanism. This pattern is an exhibit by Humans, Drosophila, some snakes, fishes, etc.

The male is heterogametic as it contains XY. It produces two types of sex-determining sperms. Half the sperms carry X chromosomes and the other half carry Y chromosomes. Both types of sperms have equal chances to form.

Female is homogametic as it contains XX. It produces only one type of gamete. The egg has X chromosome.

A male has X chromosome and a much shorter Y chromosome with the SRY gene. The 23rd pair in man is heteromorphic. While the female has both XX chromosomes.

The ZW mechanism is common in birds, butterflies, and moths. This was discovered by J. Seiler in 1914 in the moth. It is the reverse of the XY system. 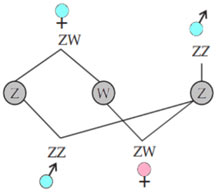 In this system, the female is heterogametic XY and produces two types of eggs X and Y in equal proportions.

The male is homogametic XX and each carries X chromosome so they all are similar.