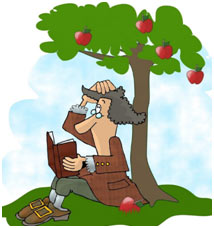 Law of Gravity and Relation with Newton’s Third Law

The very first man who developed the concept of gravity was Isaac Newton. It was an evening of 1665 when he was trying to solve the secret why planets revolve around the Sun. Unexpectedly an apple fell from the tree under which he was sitting.

The idea of gravity flashed in his mind. He found not only the reason for falling apple but also the cause that makes the planets to move around the Sun and the moon around the Earth.

The Force of Gravitation

On the basis of his observations, Newton concluded that the force which triggers an apple to fall on the Earth and the force which keeps the moon in its orbit is of the very same nature.

He further concluded that there exists a force due to which everybody of the universe attracts in every other body. He called this force the force of gravitation.

According to Newton’s law of universal gravitation: Consider two bodies of masses m1 and m2. The distance between the centres of the masses is d.

According to the law of gravitation, the gravitational force of attraction F with which the two masses m and m separated by a distance d attract each other can be stated as:

By combining both we get,

Now by putting constant we get the final equation,

Here G is the proportionality constant. It is called the universal constant of gravitation. Its value is the same all over. In SI units its value is 6.673 x10-11Nm2kg-2.

Due to the little value of G, the gravitational force of attraction between things around us is really small and we do not feel it. Given that the mass of Earth is large, it attracts close-by items with a significant force.

The weight of a thing on the Earth is the result of the gravitational force of attraction between the Earth and the object. Law of Gravitation and Third Law of Newton

The action and reaction due to the force of gravitation are equivalent in magnitude but opposite in direction. This follows Newton’s 3rd law of motion which specifies, to every action there is always an equivalent but opposite reaction.