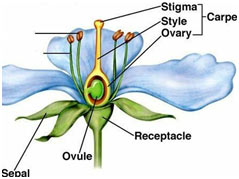 The structure of a plant that develops into the seed upon fertilization is called ovules. It is the precursor to seeds. Basically, these are immature seeds consisting of integuments, nucellus, and female gametophyte or reproductive cells.

The ovule develops from the placenta of the ovary. Meiosis and megaspore formation occurs within the ovule. Therefore, the ovule represents a megasporangium. The ovule consists of a stalk or funiculus. It bears the nucellus surrounded by one or two integuments. Following steps take place during the formation of the ovule.

The periclinal divisions occur in the layer of hypodermal cells. It forms ovule primordium and this primordium becomes a conical structure with a rounded tip.

The tip of primordium forms nucellus. The growth of nucellus is unequal. These various degrees of curvature are formed in the main body of the ovule and result in the formation of different types of ovules.

Integuments arise as rim-like outgrowths from the basal cells of the nucellus. It surrounds the nucellus completely except at the tip of the ovule. Thus, the inner integument contains a tubular opening. This opening is called the micropyle. 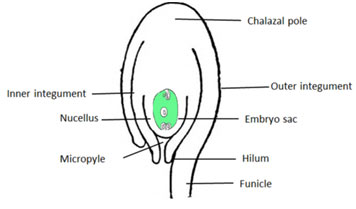 The ovule can be classified into the following types on the basis of the relative position of the micropyle, chalaza, and funicle:

The ovule is erect. Thus, the funicle, chalaza, and micropyle all lie in one and the same vertical line. This type of ovule is found in members of the family Polygonaceous.

This is the most common type of ovule and is found in almost all the members of the Sympetalae. It also occurs in other families of both dicots and monocots.

This is an intermediate type between Orthotropous and anatropous. The ovule body is at the right angle to its stalk or funicle. The fusion of the integuments with the funicle is very slight. Thus, the hilum, chalaza, and micropyle all lie apart from one another.

This is very rare type. It is found in Primulaceae, Ranunculaceae, and some members of Cruciferae.

The body of the ovule is straight but it is twisted transversely at right angles. Thus, the chalaza and micropyle are in the same line. They are at right angles to the funicle. This type of ovule is common in Ranunculus.

The body of the ovule is bent upon itself like a horse-shoe. Thus, the micropyle comes to lie near the funicle. This is also rare. It is found in members of the family Leguminosae, Caryophyllaceae, Cruciferae, and Poaceae.

The nucellus and the axis remain in the same line in the beginning but rapid growth occurs on one side. Tus, the ovule gets inverted. This curvature continues and the ovule turns completely. So once again, the micropyle faces upwards.

This type of ovule is found in Plumbago and Opuntia.