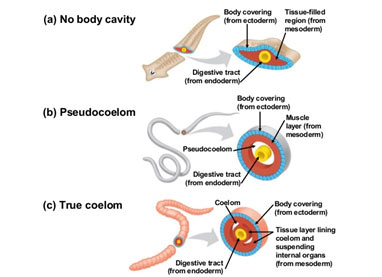 The name Animalia derived from the Latin word, anima = breath or soul. Kingdom Animalia is comprised of most animals that are multicellular, diploid eukaryotic, ingestive heterotrophs, and grow from two different haploid gametes, a massive egg and also a small sperm.

Animal cells lack the rigid cell walls which are characteristics of plant cells. The bodies of most of the animals are composed of cells organized into tissues, each tissue is specialized to perform their specific tasks in the body. In most animals, tissues are coordinated to form more specialized organs. Most animals are designed for complex and relatively quick functions in comparison with plants as well as other living creatures.

Most reproduce sexually, by the method of differentiated sperm and eggs. Most animals are diploid, and therefore the cells of adults comprise two copies of hereditary material. The development of most animals is characterized by distinctive stages, including a zygote, formed by the product of the first few division of cells following fertilization; a blastula, which is a hollow ball of cells formed by the developing zygote; and a gastrula, which is formed when the blastula folds in on itself to form a double-walled structure with an opening to the outside, the blastopore.

Over one and a half million species of animals inhabit the earth. Animals vary in size from a few cells to living organisms weighing many tons, such as blue whales and elephants. By the way, approximately nine hundred thousand species of animals are insects, and other small animals comprising different phyla such as molluscs, crustaceans, and nematodes additionally being especially diverse. With this step, our own group, the vertebrates, is comparatively insignificant from the diversity perspective.

The basis for Animal Kingdom Classification

Animals could be categorized on the basis of symmetry. So, there are two symmetries found in the kingdom Animalia

Inside this class animals with radial symmetry are included. This is an organization or arrangement where the parts of the body have been arranged around a central axis in a manner any plane passing through the fundamental axis divides the creature into halves which are nearly the mirror image of each other e.g. like in phylum cnidaria (Coelenterata).

The cylindrical body of a sea anemone can be cut in two equal halves erectly in any plane. This collection comprises animals with bilateral symmetry. In an animal where the right and the left side is approximately the same and have different anterior and posterior ends are said to possess bilateral symmetry. The animal can be divided into two equal portions with an imaginary line but just in one place. In the majority of multicellular creatures, there is obviously differentiated head at the anterior side and different posterior end. Plus, there are clearly defined dorsal and ventral surfaces.

The phyla included by this are Platyhelminthes, Nematoda, Annelida, Mollusca, Arthropoda, Echinodermata, Hemichordate, and Chordata. It must be mentioned here that the animals belonging to the phylum Echinodermata, have developed bilateral symmetry, as is evident, from the study of the structure of their larvae. However, the adult Echinoderms, have secondarily developed radial symmetry, due to their special mode of life. Diploblastic animals fit in grade radiata. The body of those animals is made up of two layers of cells, both ectoderm, and endoderm. There is jelly-like mesenchyme or mesoglea which in most cases is noncellular. Diploblastic organisms have lesser level of specialization plus so they do not form specialized organs.

There is not any exclusive transport system in these creatures. Most substances are dispersed in their own body through diffusion. There is not any central nervous system in these creatures. Only a neuron net is present. There is just a single cavity within the body referred to as a gastrovascular cavity that has just a mouth that functions for the entrance of water and food as well as for the elimination of wastes along with water. That is referred to as the sac digestive tract. Diploblastic animals are comprised in phylum Cnidaria (coelenterate).

Triploblastic animals are comprised of phyla that have been put into grade Bilateria. The body of those creatures consists of three layers ectoderm, mesoderm, and endoderm. After embryonic development such layers in the majority of triploblastic animals are not differentiated as separate layers of cells, however, are represented with the structures made from them. The tissues of these organisms reveal a greater amount of specialization.

All these include specialized tissues, organs, and organ systems. Special transport systems i.e. blood-vascular systems are present within the majority of the triploblastic animals. The systems like integumentary and nervous are formed by ectoderm. Mesodermhelps in the formation of muscle, reproductive, and skeletal systems. Endoderm creates the lining of intestinal glands and tract of the digestive cavity, such as the liver. The gastrointestinal tract is of tube type consist of the mouth in the anterior end and the anus at the posterior end. Triploblastic animals might be acoelomate, pseudocoelomate, or even coelomate. In animals in which there is not any cavity or coelom, and also the mesoderm creates a loose, cellular tissue identified as mesenchyma or parenchyma that fills the hollow space between the ectoderm and endoderm. It creates packaging across the inner organs of these animals to provide support and protect them. Such animals are called acoelomates. In acoelomates the gut is sac-like and there is not any special transport system. The only excretory system is present for the transfer of excretory products. This layer is made up of weak cells, excretory ducts, and excretory pores. However, the nervous system is well developed in these organisms.

As an instance: the phylum Platyhelminthes

The space between the body wall and the digestive tract is known as pseudocoelom (pseudo means false and coelom means cavity so it is also called a false body cavity). Pseudocoelom is not homologous to true coelom due to the reason it is not lined with coelomic epithelium. It develops from the blastocoel of the embryo and it is bounded by the muscles from outside and internally by the cuticle of the intestine. The animals having pseudocoelom are called pseudocoelomates.

As an instance: the phylum Aschelminthes

The coelom is a cavity found in between the body and the alimentary canal and is lined with mesoderm. The mesoderm divides into two layers the outer parietal layer that underlines the body wall and the visceral layer that covers the alimentary canal. The cavity between them is a true coelom. It’s filled by fluid referred to as coelomic fluid. The animals that have coelom or true body cavity are called coelomates. In coelomates, the gut accomplishes more complexity and the neuro-sensory system is well developed together with excretory system, circulatory system, reproductive and respiratory systems.

As an example: phylum from annelids to chordates. Presence or lack of Notochord

The notochord is a rod-like structure derived from mesoderm the center layer of cells or tissues of an embryo, and also so the parts formed out of this for example bones, muscles, and cartilages, formed over the dorsal side [posterior] throughout embryonic development within some animals.

Animals with notochord are called chordates and organisms that do not form this rod-like arrangement of cells are called non-chordates, for example, phylum Porifera to Echinoderms.