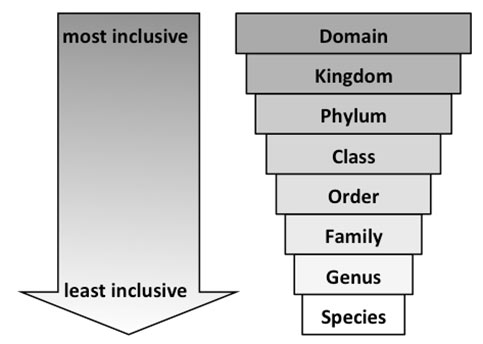 Every part of Earth has its own vegetation, animals, and microorganisms. Even the ice-covered polar regions, barren plateaus, huge mountains, damp woods and forests, rivers, lakes, stagnant pools all of them have a significant variety of life. The number of distinct living things is tremendous.

We might, for instance, categorize flowering plants in accordance with their color, stature, flower shape, or other characters. Such a classification is not meaningful as it does not supply any information on the subject of the basic similarities and differences of various individuals.

All organisms are linked to the other organisms at some point in their evolutionary histories. But some organisms are far more closely related to others. Sparrows tend to be more closely linked to pigeons than either to the insects. The classification relies on the relationship amongst individuals, in other words, the similarity in structure or form.

“A species is a set of pure organisms which may interbreed freely among themselves and produce fertile offsprings, however, are reproductively isolated from other such classes within nature”.

Nevertheless “interbreeding” can not be applied as a standard for Species recognition among mainly asexually reproducing organisms. Each species owns its very own different structural, behavioral, and environmental traits. Hence species are separate evolutionary units.

Various species do not exchange genes between them. Ever since long, living things are divided into 2 kingdoms: plants and animals. Next, each kingdom is split into smaller groups called phyla (also divisions for algae, plants, and fungi).

A phylum, consequently, is divided into classes, classes into order along with order into families. A family comprises related genera, and a genus is consisting of one or more species. Species are the fundamental unit of classification. Conversely speaking, the organisms have been grouped into larger, more comprehensive categories (taxa), each category is far significantly more general than the one under it and also it has emergent properties. The taxonomic categories from species to kingdom and domain form a hierarchy.

First and foremost, there is no theory for modern taxonomic procedures. In-effect taxonomic, approaches rely upon:

A taxon at the highest position of organisms, above the kingdom. The three domain names include: Bacteria, Archaea, and Eukarya, which are the significant categories of life

All organisms are divided into five kingdoms.

Level of classification or taxonomic rank below kingdom or is a group of related classes.

A class is a group of related orders.

A family is a group of related genera.

A genus is a group of related species.

A specie consists of similar organisms which can interbreed freely in nature.

Plants can prepare their own food from simple inorganic material (carbon, oxygen, and water) by the process of photosynthesis and also store energy (autotrophs), while animals can not synthesize their own food from simple organic material and also rely on their food on autotrophs or on decaying organic matter (heterotrophs). Bacteria were included in plants. Lots of biologists found this system decent, while many others found it unworkable for a lot of unicellular organisms such as Euglena who have plant-like characters such as (presence of chlorophyll) and animal-like features (absence of cell wall) and also because it Ignores the differences between prokaryotic and eukaryotic cell.

Back in 1866, Ernst Hackel suggested a third kingdom Protista adapt Euglena Like organisms and bacteria. In 1937. E-Chatton suggested differentiating terms: procariotique (from Greek pro, meaning before and karyon meaning nucleus) used to explain bacteria and blue-green algae, and also the definition of eucariotique from Greek EU (mean true) to characterize plant and animal cells.

A few biologists also disagree concerning the type of fungi, for example, bread mold, mushrooms, and yeast that resemble plants in lots of ways but are perhaps not autotrophs. Fungi are special kinds of heterotrophs that obtain structural and energy material by breaking down (decomposing) and absorbing food compounds from the environmental surroundings, and still have chitin like a key structural element within their cell walls.

A Relatively recent method of classification, the five-kingdom classification, has been suggested by Robert Whittaker (1969). This technique of classification is centered on three distinct degrees of the cellular organization connected with three main styles of nutrition- photosynthesis, ingestion, and absorption.

Plants are autotrophic in nutritional mode, which means they make their own food by photosynthesis, like mosses, ferns, and Flowering plants. Fungi are heterotrophic organisms which are absorptive organisms in the mode of nutrition. Most fungi are decomposers that live on organic material, secrete digestive enzymes, and consume small organic molecules that are produced by digestion.

Animals reside largely by eating food and digesting it within specialized cavities. They lack cellulose and have movements such as reptiles and birds. In five kingdom classification, all eukaryotes which did not fit the meaning of fungi, plants, or Animalia were comprised in Protista. Most Protists are unicellular. However, this kingdom additionally includes simple multicellular organisms which are thought to be direct descendants of unicellular protists. 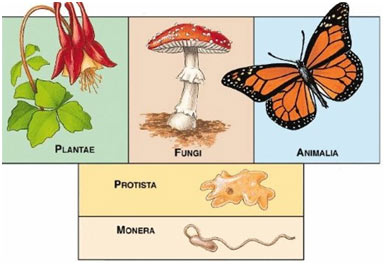