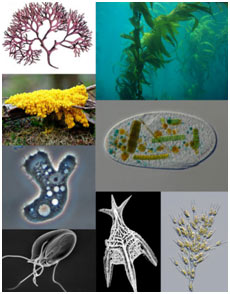 The Kingdom Protista includes a large variety of mostly aquatic eukaryotic organisms whose diverse body forms, forms of reproduction, modes of nutrition, and lifestyles make them difficult to identify. Basically, this kingdom is defined by exemption i.e., all members have characteristics that omit them from the other four kingdoms. All protists are eukaryotic and have actually developed from prokaryotes.

The protists are unicellular, colonial, or simple multi cellular organisms that have a eukaryotic cell organization. Eukaryotic cells, the unifying feature of protists, are common to complex multicellular organisms belonging to the three eukaryotic kingdoms (Fungi, Plantae, and Animalia) however clearly differentiate protists from members of the prokaryotic kingdom (Monera). Unlike plants and animals, however, protists do not develop from a blastula or an embryo.

In 1861, John Hogg proposed the kingdom Protoctista for microscopic organisms. In 1866, Ernst Haeckel suggested developing the Kingdom Protista to include bacteria and other microbes (such as Euglena) in that kingdom. He, however, separated blue-green algae and bacteria (prokaryotes) from nucleated protists and positioned them in a different group he called Monera, within the kingdom Protista.

In 1938, Herbert Copeland raised the prokaryotes to kingdom status, hence separating them from Protista. In the five-kingdom system of Robert Whittaker (1969) just unicellular eukaryotes were positioned in kingdom Protista. Currently, this kingdom also includes colonial and simple multicellular eukaryotes too. Margulis and Schwartz (1988) modified the five-kingdom system. Protista or Protoctista is one of the five kingdoms.

During the course of evolutionary history, organisms in the kingdom Protista have progressed diversity in their (a) size and structure, (b) means of locomotion, (c) ways of getting nutrients, (d) interactions with other organisms, (e) habitat and (f) modes of reproduction. Variety is shown by all of the significant protist groups.

Based upon the diversity, the majority of biologists concern the protists kingdom as a polyphyletic group of organisms; that is, the protists probably do not share a single typical ancestor. Margulis and Schwartz have actually noted 27 phyla to accommodate this diverse assemblage of organisms.

All protozoans are unicellular. Many ingest their food by endocytosis. These are some major groups.

This group includes all free-living freshwater, marine, and soil amoebae in addition to those that are parasites of animals. Amoebae lack flagella and move by forming specialized cytoplasmic projections called pseudopodia (false feet). Amoeba constantly alters shape as the organism moves and feeds.

The giant amoeba Pelomyxa palustris may be the most primitive of all eukaryote like kinds. This species has several membrane-bound nuclei but none of the other organelles found in all other eukaryotes. The giant amoebas obtain energy from methanogenic bacteria, which reside inside them. Giant amoebas inhabit mud at the bottom of freshwater ponds, where they contribute to the degradation of natural molecules. These protists are primarily unicellular (a few are colonial) organisms with round or elongated bodies with a single center nucleus. They have from one to many long, whip-like flagella that enable them to move. Flagellates move rapidly, pulling themselves forward by lashing flexible flagella, which are generally found at the anterior end.

Flagellates get their food either by ingesting living or dead organisms or by taking in nutrients from dead or decomposing raw material. They may be free-living, symbionts, or parasites. Tritonymphs are complex, specialized flagellates with many flagella that live as symbionts in the guts of termites and help in the food digestion of dry wood.

Parasitic flagellates trigger illness. For instance, Trypanosoma is a human parasite causing African sleeping sickness. It is transferred by the bite of the infected tsetse fly.

Choanoflagellates are sessile marine or freshwater flagellates that are attached by a stalk and their single flagellum is surrounded by a fragile collar. They are of special interest because of their striking resemblance to collar cells in sponges. Ciliates are unicellular organisms with a flexible external covering called a pellicle that provides a definite however changeable shape. In Paramecium, the surface area of the cell is covered with a number of thousand fine, short, hair-like structures called cilia.

The cilia beat in such an exactly collaborated style that the organism can move forward, can also go back and turn around. Some ciliates are sessile and stay connected to a rock or other surface area. Their cilia set up water currents that draw food towards them. Many ciliates consume bacteria or other small protists.

Water regulation in freshwater ciliates is controlled by unique organelles called contractile vacuoles. Ciliates differ from other protozoans in having 2 types of nuclei. Several little diploid micronuclei operate in the sexual process and a large, polyploid macronucleus manages cell metabolic process and growth. Many ciliates are capable of a sexual procedure called conjugation. Throughout conjugation 2 individuals come together and exchange hereditary material. These marine protozoans produce shells (or tests). Tests of foraminifera are made from calcium whereas those of actinopods are made of silica. The shells or tests include pores through which cytoplasmic projections can be extended.

These cytoplasmic projections form a sticky, interconnected web that entangles prey. Dead foraminifera sinks to the bottom of the ocean where their shells form a grey mud that is slowly changed into chalk. Foraminifera of the past has created huge limestone deposits. Apicomplexans are a large group of parasitic protozoa, some of which trigger major diseases such as malaria in human beings. Apicomplexans do not have specific structures for locomotion however move by flexing. At some phase in their lives, they establish a spore, a small infective agent sent to the next host. Lots of Apicomplexans spend part of their life in one host and part in a different host species.

Plasmodium, the apicomplexan that triggers malaria, gets in human blood through the bite of a contaminated female Anopheles mosquito. Plasmodium first gets in liver cells and after that red blood cells, where it multiplies. When each infected red cell bursts, many new parasites are released.

The released parasites contaminate new red cells, and the procedure is repeated. The synchronized bursting of countless red cells triggers the symptoms of malaria; a chill, followed by high fever brought on by harmful substances that are released and affect other organs of the body.