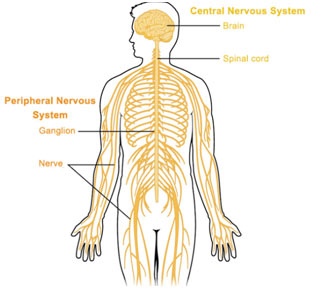 It consists of sensory neurons and motor neurons, which may form ganglia and the nerves. Ganglia are the concentrations of cell bodies of neurons. The nerves are the packages of axons or dendrites, bounded by connective tissue. They may be sensory-motor or mixed nerves depending upon the directions of impulse they conduct.

In humans, there are 12 pairs (24) of nerves, which arise from the brain or lead to the brain. These nerves are called cerebral or cranial nerves. A few of these nerves are sensory, some motor, and some are mixed.

From the spine 31 sets (62) of spinal nerves emerge or lead to the spinal cord. All these nerves are combined having fibers of both sensory and motor neurons.

The word soma is stemmed from Greek which means” body”. The somatic system is the part of the peripheral nervous system responsible for bringing sensory and motor information to and from the central nervous system. The somatic system is responsible for sending sensory details along with for voluntary movement. This system consists of two major types of neurons:

Motor neurons: Also called efferent nerve cells, motor neurons carry information from the brain and spine to muscle fibers throughout the body. These motor neurons permit us to take physical action in response to stimuli in the environment.

The autonomic system is the part of the peripheral nervous system that’s responsible for controlling involuntary body functions, such as blood circulation, heartbeat, digestion, and breathing.

Simply put, it is the autonomic system that manages elements of the body that are generally not under voluntary control. This system enables these functions to occur without requiring to purposely to consider them occurring. The autonomic system is further divided into 2 parts:

Most ganglion fibers of the sympathetic system develop from the middle portion of the spine and almost end in ganglia that lie near the spinal cord.

This system is essential throughout emergency circumstances and is associated with “fight or flight.” This system accelerates the heartbeat, dilates the pupil, and hampers the digestion of food, etc.

A couple of cranial nerves including the vagus nerve together with the nerves from the bottom portion of the spinal cord, create the parasympathetic nervous system.

Further Reading:  What is Nervous System

It promotes all the internal actions which are associated with the relaxed state i.e. contraction of the pupil, promotes digestion of food, slows down heartbeat. Following are a few of the common disorders of the nervous system in humans:

It is a nervous disorder, specified by involuntary tremors, reduced motor power, and rigidity. The mental faculties are not affected.

The disease is thought to be caused by cell death in a brain area that produces dopamine. The disease might result by head trauma.

The start of disease is typically in 50’s and 60’s. The disease is gradually progressive; the patient might live for many years.

Effective drugs are offered such as L- dopa. A naturally occurring protein called glial cell-line derived: neurotrophic factor (GDNF) has actually been shown to boost uptake of dopamine when provided to lab rats and monkeys. GDNF might be utilized in the future for people in the treatment of this disease.

It is one of the convulsive disorders of nerves which are characterized by abrupt transient symptoms of motor, sensory, psychic, or autonomic nature, often related to changes in consciousness. These changes are believed to be secondary to unexpected transient alterations in brain function related to excessive fast electrical discharges in the gray matter.

The beginning of epilepsy is generally prior to age 30. Later on, age-onset suggests natural disease. In some patients, psychological or emotional disturbances play a significant “trigger” function.

Electroencephalography (EEG) is the most important test in the research study of epilepsy. Anticonvulsant drugs are used. Alcohol aggravates epilepsy, so persons suffering from epilepsy ought to avoid alcohol.

Alzheimer’s disease was first explained by Alois Alzheimer in 1907.

It is defined by the decline in brain function. Its symptoms resemble those diseases that cause dementia (amnesia/ memory loss). There is a hereditary predisposition to the disease in some people, so it tends to run in families.

There is proof that high levels of aluminium may contribute to the start of this disease. There is also a decline in brain function with age.

Action of Nicotine on Nervous System:

Nicotine affects the postsynaptic membrane in CNS and PNS. It mimics the action of acetylcholine on nicotine receptors, so it is a stimulant of the nerve impulse. It increases the heartbeat rate, blood pressure, and digestive tract movement. Nicotine may induce vomiting and diarrhoea and even may cause water retention relation by kidneys.