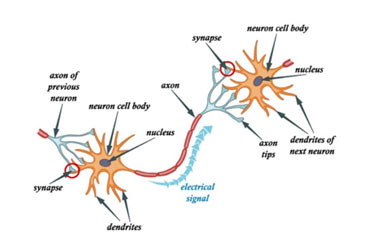 What is Nerve Impulse?

“Nerve impulse is a wave of electrochemical changes, which travels along the length of the neuron including chemical reactions and motion of ions across the cell membrane”.

An electrical potential is a measure of the capability to do electrical work. It represents a kind of saving energy that is manifested during the separation of charges across a barrier.

When it comes to neurons, the charges are positive and negative ions, and the charge separating barrier is the plasma membrane. The electrical potential that exists throughout a cell membrane is called the membrane potential. A typical neuron at rest is more positive electrically outside than inside the cell membrane. This net difference in charge between the inner and the outer surface area of a non-conducting neuron is called the resting membrane potential. The significant factors which are involved in resting membrane potential are:

Driven by the splitting of ATP, these pumps transport Na+ out and K+ into the cell, both against their particular concentration gradients. For every two K+ that are actively carried inward, three Na+ are pumped out. So inside becomes more negative than the outside of the cell membrane of neurons.

The large negative organic ions (such as proteins, organic acids, etc) are a lot more inside the membrane than outside, where they are only in minimal concentration. This makes the inside of the neuron membrane more negative.

3.Leakage of K+ ions from neurons

The cell membrane is practically impenetrable to all ions other than K+. Considering that the membrane is somewhat permeable to K+, a few of it leakages out of the cell. The loss of this positive ion from the neuron by diffusion accounts for more negative’ charges within than outside the cell membrane of the neuron.

There is no conduction of nerve impulses.

Threshold stimulus: Under normal conditions, a nerve impulse is started by a proper stimulus (called threshold stimulus) applied at one end of the neuron and it results in an impressive localized change in the resting membrane potential.

“When a neuron is stimulated, the cell membrane at the point of stimulation undergoes a momentary reversal in charge (dark color) called an action potential. Perhaps for a millisecond, the inside of the membrane becomes positive relative to the outside”.

During this state, the inner membrane surface area becomes more positive than the outside. This change is so short (for perhaps a millisecond) that just a portion of the neuron remains in the active membrane potential state.

The passage of nerve impulse is associated with an increase in permeability of Na+ ions moving inwards disturbing the potential momentarily, making the inside more positive than outside. Neurophysiologists think that the increased permeability is because of the opening of specific pores in the membrane, described as “sodium gates”. When these gates open, sodium ions rush into the neuron by diffusion. Some K+ moves out. The inner side of the cell membrane has an excess of positive ions (thus positive charges) at its internal surface area, and the outer surface area becomes more negative.

Throughout active membrane potential, the neuron conducts the impulse in the form of the nerve impulses.

These changes occur along the length of the neuron till the impulse reaches synapse.

Shortly after passage of the impulse, the resting membrane potential is brought back by the movement of a small number of ions particularly K+ moving out. This neuron now is ready to conduct another impulse.

It may be added that in myelinated neurons the impulse leaps from node to node (node of Ranvier). This is called saltatory impulse.

Successive neurons are so arranged that the axon endings of one nerve cell are linked to the dendrites of the next neuron. There is no cytoplasmic connection between the two nerve cells and tiny spaces are left in between them. Each of these contact points is referred to as a synapse. A single nerve cell might form synapses with many incoming fibers of different nerve cells. A nerve impulse is passed from one nerve cell to the other through the synapse, however, a single impulse does not always get across the synapse. It may take two or three impulses getting here in quick succession or maybe all at once from two or more fibers to start an impulse in the next neuron.

The action potential can not jump from one nerve cell to the next in line; rather the message is transferred through synapse in the form of a chemical messenger called a neurotransmitter.

Neurotransmitters are chemicals that are released at the axon ending of the neurons, at the synapse.

Numerous different kinds of neurotransmitters are known. These are: Depolarization is caused by

Under resting condition inner part of the cell membrane of neuron is:

Maximum speed of nerve impulse in humans is

A nerve impulse is passed from one to another neuron by