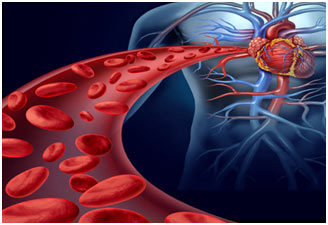 The circulatory system of humans has 3 fundamental components.

In this article, we will discuss the circulating fluid in bodies – The Blood.

The circulatory fluid – The blood

The blood is the medium in which dissolved nutrients, gases, hormones, and wastes are carried through the body. It is made up of two primary components, 1. Plasma and 2. cells or cell-like bodies (white blood cells, red cell, platelets). The weight of the blood in our body is 1/12th of our body. Plasma is primarily water in which proteins, salts, nutrients and wastes are dissolved. Water constitutes about 90% of plasma, 10% are other dissolved substances. Most of the dissolved substances are preserved at a constant or nearly consistent level, but others occur in varying concentrations.

The substances dissolved or present in plasma vary in their concentrations, with the condition of the organism and with the part of the system under examination. The solutes can be divided into 6 groups: Together the inorganic ions and salts make up 0.9% of the plasma, of humans, by weight; more than two-thirds of this quantity are sodium chloride the common table salt. Even if the total concentration of dissolved substances stays the exact same, shifts in the concentration of specific ion can produce severe disturbances. The normal pH of human blood is 7.4; and it is kept between narrow limits, due to the fact that the change in pH would affect the chemical reactions of the body.

The plasma proteins constitute 7-9 per cent by weight of the plasma. The majority of these proteins are synthesized in the liver. Some of the globulins, called immunoglobulins or antibodies, are produced in response to antigens, by lymphocytes; and after that are passed to plasma and lymph.

The proteins like prothrombin act as a catalyst in the blood clot process. Fibrinogen participates in the blood clotting procedure. Immunoglobulins play an essential role in the body’s defences against illness.

Organic nutrients in the blood consist of, glucose, fats, phospholipids, amino acids and lactic acids. A few of them enter the blood from the intestine (absorption). Lactic acid is produced in muscles as a result of glycolysis and is transported by the blood to the liver. Cholesterol is an essential constituent, it is metabolized to some extent, but also functions as a precursor of steroid hormonal agents.

These are the most numerous of the cells in the blood. A cubic millimetre consists of 5-1/2 million of them in males, and 4-1/2 million in females. These cells, when formed, have a nucleus, but it is lost prior to they enter the circulatory fluid or blood. 95% of the cytoplasm of red blood cells is the red pigment, called haemoglobin the remaining 5% consists of enzymes, salts and other proteins.

The red cells when grow, do not divide. Red blood cells are formed primarily at a bone marrow of short bones, such as the sternum, ribs and vertebrae. In the embryonic life, they are formed in the liver and spleen. The typical life span of the red cell is four months after which it breaks down in the liver and spleen – partially by phagocytes by phagocytosis. These blood cells are colourless, as they do not contain pigments. One cubic millimetre of blood contains 7000 to 8000 of them. They are much larger than the red cell. There are at least five different types which can be distinguished on the basis of the shape of the nucleus and density of granules in the cytoplasm. They can be organized into two primary types, granulocytes and agranulocytes.

Monocytes remain from 10- 20 hours in the blood, then enter tissues and end up being tissue macrophages, performing the phagocytotic function. Lymphocytes have life spans of months or even years, but this depends upon the body’s requirement for these cells. Leucocytes safeguard the body against foreign invaders and use the circulatory system to travel to the site of invasion. Monocytes and neutrophils move through capillaries and reach the site of injury where bacteria have actually gained entry. Macrophages and neutrophils eat bacterial intruders or other foreign cells, consisting of cancer cells. They normally die at the same time, and their dead bodies build up and add to the white substance called pus, seen at infection sites.

Basophils produce heparin – a substance that hinders blood clot. These also produce chemicals, such as histamine, that participate in allergies and in reactions to tissue damage and microbial invasion. Lymphocytes help to provide resistance versus the disease.

These are not cells but are fragments of big cells called megakaryocytes. There is no nucleus in them. There is no pigment in them. Platelets help in the conversion of fibrinogen, a soluble plasma protein, into insoluble kind, fibrin. The fibrin threads ensnare red blood cells and other platelets in the location of damaged tissue, eventually forming an embolism or blood clot. The clot works as a short-term seal to prevent bleeding until the harmed tissue can be repaired. The functions of blood in human beings can be listed as follows: