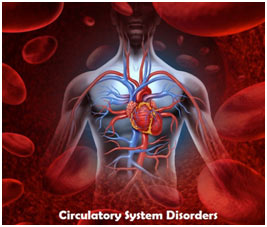 There are certain disorders, related to the circulatory system (blood, vessels, heart). Some of them are discussed below:

It is the outcome of unrestrained production of white blood cells (leucocytes). This is brought on by malignant mutation of a myelogenous or lymphogenous cell. The Leucaemia is usually characterized by largely increased numbers of unusual white blood cells in the circulating blood.

It is a very serious condition and the patient needs to alter the blood with the normal blood, got from donors. It can be cured by bone marrow transplant which is in most cases effective, however really expensive treatment.

It is also known as Cooley’s anaemia on the name of Thomas B. Cooley, American paediatrician. It is a genetically transferred haemoglobin abnormality. It is defined by the presence of microcytes, by splenomegaly (enhancement of spleen) and by changes in the bones and skin. The blood of these patients is to be replaced frequently, with regular blood. Atherosclerosis is a significant condition leading to cardiovascular disease

It can be cured by bone marrow transplant – which is very expensive and does not give a 100% treatment rate. Haemoglobin molecule most of the times, does not have (b- chains in it, rather Fchain exists (F is foetal haemoglobin).

It indicates the existence of excess fluid in the tissues of the body. The excess fluid may be in the cells, or outside the cells. The intracellular oedema is caused by osmosis of water into the cells, and cause depression of metabolic systems (due to lack of nutrition and O2 in the tissues) particularly and the Na-pump.

Extracellular oedema may be the outcome of:

Failure of the interatrial foramen (an opening in the inter-atrial septum) to close or of ductus arteriosus to fully constrict lead to cyanosis (blueness of skin) of the newborn infant. This is because of the blending of blood between two atria and the combined blood is supplied to the body of newborns resulting in the blueness of the skin, thus the name blue babies.

It is existing together atheroma and arteriosclerosis; atheroma is the deposition of tough yellow plaque of lipoid product in the innermost layer of the arteries, which might be because of the high level of cholesterol in the blood. Arteriosclerosis is a degenerative arterial change related to advancing age.

Primarily a thickening of the middle layer of arteries, and generally associated with some degree of atheroma. So, Atherosclerosis causes narrowing and hardening of arteries. This increases the danger of formation of thrombus and if the thrombus is formed in the brain or heart it is fatal. Atherosclerosis is a significant condition leading to cardiovascular disease. It is a condition of high blood pressure. Prolonged hypertension damages the lining of the capillary and also causes weakening of heart muscles (which have actually ended up being thickened due to the continuous strain troubled them), with declining efficiency of the pumping action of the heart. Blood might then be retained in the heart and lungs, often leading to a deadly condition called heart disease. Thrombus is a solid mass or plug of blood constituents (clot) in a capillary. This mass may obstruct (wholly or only in part) the vessels in which it forms, or it may be removed and reached some other place in the circulatory system, in which case it is called an embolus. Thrombosis is the formation of thrombus. Thromboembolism is the leading cause of deaths in western civilization.

Clot or blockage of a blood vessel in the heart by an embolus (or by locally formed thrombus) triggers necrosis or damage to part of heart muscles, a condition is known as a cardiac arrest or technically myocardial infarction, Cardiovascular disease is due to disruptions of the control system of the heart with accompanying arrhythmias, especially ventricular fibrillation.

We can prevent the above-mentioned situations if we:

If the normal flow of blood is blocked by an embolus (or a locally formed thrombus), in a capillary in the brain, and triggers necrosis, or death, of the surrounding neural tissue (owing to the absence of O2), the condition is called a stroke or cerebral infarction. The symptoms of the stroke differ depending upon the part of the brain that has been damaged.

In almost all the above pointed out problems, it is necessary to take following preventive measures: