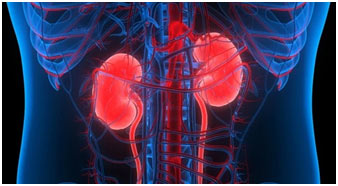 Nephron – The Functional Unit of Kidney

A nephron is the basic unit of structure in the kidney. A nephron separates water, ions and small particles from the blood, filter out wastes and toxins and return required molecules to the blood. The nephron works through ultrafiltration.

Ultrafiltration happens when high blood pressure forces water and other small molecules through small spaces in capillary walls. This substance does not have blood cells and large particles in the bloodstream are called an ultrafiltrate. The ultrafiltrate travels through the various loops of the nephron, where water and essential particles are removed, and gathered into a collecting duct that drains into the bladder.

The glomerulus is the specialized configuration of capillaries within the nephron that make kidneys. Vertebrates are the only group to have developed kidneys, which are mostly used to conserve water in terrestrial environments. Fish and other primitive vertebrates excrete ammonia as a by-product of protein reactions.

Ammonia is harmful in the bloodstream and should be removed. Reptiles and birds excrete uric acid, which is a more concentrated form of ammonia. Mammals have actually a lot more obtained nephrons, which contain an extended loop, called the loop of Henle.

Mammals produce urea from ammonia and concentrate the urea in the urine to a high extent. This promotes the extraction of water from the ultrafiltrate and enables mammals to live in some of the driest environments in the world. A camel, for example, will continually filter most of the water from its blood, recollect a large majority of that water, and recycle it continually. In each nephron, the inner end forms a cup-shaped swelling, called Bowman’s capsule and it is around a ball of blood vessels called the glomerulus. Glomerulus flows blood through the capsule as it gets here through the afferent arteriole and leaves the capsule by the efferent arteriole. The blood vessel subdivides again into another network of capillaries, the peritubular capillaries.

Bowman capsule continues as extensively convoluted proximal tubule, a loop of Henle and the distal tubule, which empties into collecting tubules. The collecting tubules open into the pelvis. The filtrate from the glomerulus passes through these structures and is processed ultimately for urine formation. The peritubular blood vessels intermingle with proximal and distal tubules of the nephron. In juxtamedullary nephrons, additional capillaries extend down to from a loop of vessels, vasa recta.

Blood passing through the glomerulus is filtered into Bowman’s capsule. It is specifically filtered here, unlike at the other parts of the vessels, because glomerulus walls are porous, and the portion of the blood pressure reaching here provides the filtering pressure. The filtrate appearing in Bowman’s capsule is called glomerular filtrate, which contains numerous beneficial compounds such as glucose, amino acids, salts, etc. in an aqueous solution.

The tubular epithelium likewise secretes substances into the lumen, this secretion is really selective and is primarily of hydrogen ions to stabilize the pH value of the filtrate traveling through the tubule. The interstitial fluid of the kidney is gradually concentrated from the cortical to the medullary part, hence the inner medulla is extremely concentrated with the existence of urea and through a mechanism of countercurrent multiplier. This mechanism causes a steady osmotic outflow of water from the filtrate back to the kidney as it passes downward in the descending loop of Henle. Moreover, the ascending loop of Henle does not permit outflow of water from its filtrate, instead actively transports Na+ ions into the kidney interstitium to sustain its high concentration.

Different developments occur in organisms and proceeded in evolution forming the kidney-like structures in vertebrates. Kidneys are packed with dense network of capillaries, a number of tubules and ducts. the basic unit of kidneys in animals including humans is nephrons.

The waste is generating primarily at the metabolic level by the metabolism of carbohydrates, lipids, proteins and fats so known as metabolites. The end product of these is urea in humans.

In nephron, blood is filtered at glomerulus in bowman’s capsule – a network of capillaries. Then reabsorption takes place to reabsorb useful compounds like glucose and some amino acids and salts.

Then there is secretion of mainly hydrogen ions for balancing the pH of tubules. There is also a mechanism in nephron called counter current multiplier for the reabsorption and conservation of useful amount of water.