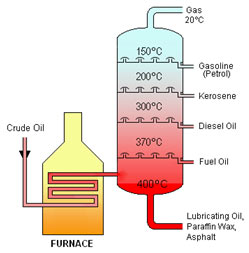 The fractional distillation of petroleum gives only around 20% fuel. As a result of its high demand, this supply is augmented by transforming excess supplies of less desirable oil fractions such as kerosene oil and gasoline oil into fuel by a process called cracking.

It is defined as cracking of higher hydrocarbons having high boiling points into a selection of lower hydrocarbons, which are much more volatile (reduced boiling).

This is the process in which C-C bonds in long-chain alkane molecules are broken, generating smaller molecules of both alkanes and also alkenes. The make-up of the products depends upon the condition under which the cracking takes place.

Cracking is generally performed in the following ways. 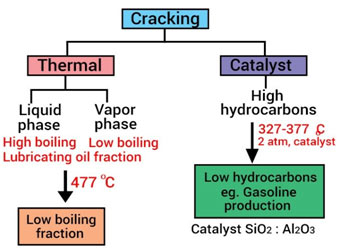 Breaking down large molecules by heating at high temperature and pressure is called Thermal Cracking. It is especially useful in the production of unsaturated hydrocarbons such as ethene and also propene.

Higher hydrocarbons can be broken at a lower temperature (500 ° C) and lower pressure (2 atm), in the presence of an appropriate catalyst. A typical catalyst used for this function is a mix of silica (SiO2) and also alumina (AI2O3).

Catalytic cracking produces fuel of higher-octane number as well as, consequently, this approach is made use of for acquiring far better high-quality fuel.

The zeolites are used in catalytic cracking are picked to give a high percentage of hydrocarbons with between 5 and 10 carbon atoms – specifically useful for fuel (gasoline). It additionally produces high proportions of branched alkanes as well as aromatic hydrocarbons like benzene.

The zeolite catalyst has sites that can eliminate hydrogen from an alkane along with the two electrons which bound it to the carbon.

In this process, higher hydrocarbons in the vapor stage are blended with steam, heated up for a short period at about 900 ° C as well as cooled rapidly. The process is appropriate for obtaining lower unsaturated hydrocarbons.