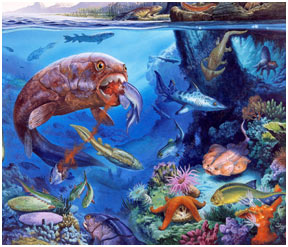 Paleozoic means ‘ancient life.’ The earliest animals on Earth appeared just before the beginning of this age in the Ediacaran era. The Paleozoic Era, which ran from about 542 million years ago to 251 million years earlier, was a time of great change on the Earth.

The period started with the breakup of one supercontinent and the formation of many. Plants became extensive. And the first vertebrate animals conquered land.

The Paleozoic is bracketed by two of one of the most major events in the history of animal life. At its beginning, multicellular animals went through a significant “surge” in variety, as well as almost all living animal phyla appeared within a couple of million years.

At the end of the Paleozoic, the largest mass extinction in history wiped out around 90% of all marine animal varieties. The root causes of both these events are still not totally recognized as well as the topic of much study and controversy.

Roughly midway in between, animals, fungi, as well as plants conquered the land, the insects took off, and the limestone was deposited.

The oldest period of Paleozoic lasted for 70 million years. In this period, a shallow sea existed from Europe to the east part of North America. The place where we find Australia today was the sea at that time.

Further Reading:  Life of the Past - The Precambrian Era

Climate: The presence of limestone and typical marine organisms suggest a rather warm mild climate.

Life: All present animal phyla except chordates were represented. There was no life on land. The large oceans were filled with seas and weeds and invertebrates like trilobites, snails, pelecypods, corals, cephalopods, sponges, annelids, etc. 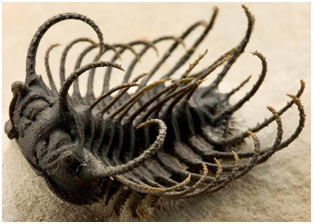 This was 430 – 500 million years ago. The continents gradually had begun to be covered with water, so much of the land was a shallow sea.

Life: This period shows a great abundance of trilobites and brachiopods as well as a striking group of giant cephalopods. The first traces of vertebrates are found in Ordovician rocks. These small animals were called Ostracoderms. These were jawless, armored, bottom-dwelling fishes without paired fins. 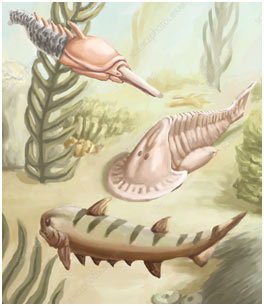 Eurypterids or water scorpions also lived in freshwater during this period.

Further Reading:  Life of the Past – Cenozoic Era

This period lasted from 395 – 430 million years ago. There were several well-defined types of ostracoderms were in existence. Two events of great biological importance occurred. The land plants evolved and air-breathing animals appeared.

This period began about 395 million years ago and lasted for about 50 million years. There was a great expansion of fishes, land plants, and first land animals – the primitive amphibians in this period.

The original ostracoderms evolved into a great variety of fish. This period is called the “Age of Fishes”. All kinds of fishes – bony, cartilaginous, were all established in marine and freshwater. By the late Devonian, two groups of bony fishes, the lungfishes and lobe-finned fishes adapted to land environments.

Towards the end of the Devonian period, ostracoderms completely disappeared and trilobites and branchiopods declined in variety and number. One of the important events in this period is the emergence of the first land vertebrates, amphibians called Stegocephalians.

This was characterized by the presence of a true forest of ferns and primitive gymnosperms.

Next, throughout the Carboniferous Duration (360 – 290 million years ago), prevalent forests of massive plants left enormous deposits of carbon that ultimately resorted to coal. The first amphibians evolved to move out of the water and colonize land, however, they had to return to the water to reproduce.

Further Reading:  Mesozoic Era - Life of the Past

Right after amphibians emerged, the initial reptiles evolved. They were the first animals that could reproduce on dry land.

During the Permian Duration (290– 245 million years ago), all the significant landmasses collided to form a supercontinent called Pangaea. The temperature was severe, and the climate was completely dry.

Many new insects appeared. Amphibians retreated to rivers and lagoons. Many groups of reptiles appeared which included animals such as Dimetrodon, Edaphosaurus, and others.

End of the Paleozoic era

The close of the Permian marked the end of the Paleozoic era. The first greater chapter in the recorded history of life. By then, many groups of plants and animals which had dominated the Paleozoic scene had become extinct.

75% of amphibian families had died out, foraminifera, bryozoans, corals, branchiopods, trilobites all vanished. The majority of fish underwent a drastic reduction.