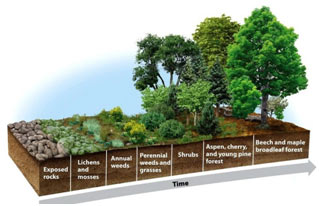 Succession is a sequence of modifications and changes in the community structure of an ecosystem over a time period.

A change in the community and its non-living environment over a period of time is called succession.

Community changes change the environment in ways that favour the competitors and species replace one another and their predecessors in somewhat foreseeable manner until a stable, self-sustaining climax community is reached. Succession is a sort of “community relay” in which assemblages of plants and animals change the earlier ones in a sequence that is at least somewhat predictable.

The accurate changes occurring throughout succession are as varied as the environments in which succession occurs, however particular general phases can be acknowledged.

In each case, succession is initiated by a few hardy invaders called pioneers and it ends with a varied and fairly steady climax community.

Succession on dry land are of two major types,

Throughout primary succession, an ecosystem is forged from bare rock, sand or clear glacial pool where there was no trace of the previous life. The development of a community from scratch is a procedure often needing thousands of years.

During secondary succession, a new ecosystem develops after an existing ecosystem is interrupted as in case of forced fire or an abandoned farm field. Secondary succession happens far more quickly than primary succession due to the fact that the previous community has actually left its mark in the form of enhanced soil and seeds and other traces of living life.

Primary succession beginning in a pond is called hydrosere.

Primary succession starting on dry soil or environment or habitat is called xerosere.

Plants growing in xeric conditions are called xerophytes, which have the ability to withstand extended periods of water lack and extreme temperature levels. Succulent plants such as the cacti have water stored in large parenchyma tissue, others have leaf modification.

Following are the stages of xerosere

Crustose refers to land lifeless structure and any external protective surface on the rock and crustose implies crusts on the substratum. Special types of lichens get impregnated in the form of crust. They can live in extreme conditions. Often, their surface is wet due to rain and dew- drops. They take in water during the dry season. They are quiescent or dormant, generally desiccated throughout the dry season. In this stage, the lichens are just similar to crumpled leaves connected at one point. It produces shade to the crustose lichens as a result of which their growth is lowered or reduced. The area becomes rough, as increasingly more fissures and depressions develop. At this phase, other plants invade called moss stage, due to the fact that now the soil is more permeable with some litter of lichens. This is the third stage with mosses. They compete with lichens for water and penetrate much deeper into the soil as compared to the lichens, adding more humus to the soil.

Common examples are: Polytrichum, Tortula, and so on.

Little seedling of herbaceous plants now establishes due to the more availability of moisture, humus, and soil for anchorage. Shrubby plants now start growing, controlling, and shadowing herbaceous plants which pass away to include more humus to the soil. The soil is improved to a level that it now allows the growth and establishment of woody plants. The shade of these plants prevents the development of many plants other than mosses, lichens, a couple of ferns etc.

Woody plants control and this phase in succession remain basically the very same if nothing changes in the environment to disturb the balance. Because it is a stable stage in succession, the woody forest is considered to be the climax phase for this area. Succession is the orderly sequence of changes in the community structure of an ecosystem over time. It occurs in ways that favour the species. The sort of community relay in which the assemblages are in sequence and somewhat predictable.

Succession consists of four to five stages and ends at climax forests or community. A climax community is the stable stage of succession.