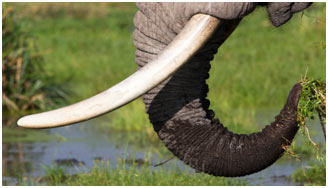 The only difference is that premolars appear in milk as well as permanent sets of teeth while molars only appear in permanent sets. Cheek teeth are specialized for shearing flesh in carnivores and for grinding in herbivores.

Mammals exhibit a number of patterns due to differences in the shape of the crown.

In these types of teeth, the crown is laterally compressed and the sharp edges of cusps of the upper and lower set fit between one another to produce a shearing effect when jaws are closed.

In ungulates such as horses, rhinoceros, deer, cattle, etc. the crown is broad and enamel is disposed of in vertical crescent-shaped columns separated by dentine. The softer dentine is worn down so that teeth provide sharp crescentic rasping ridges. Such cheek teeth are called selenodont.

These are an exaggerated condition of selenodont teeth and have enamel dentine. The enamel dentine is intricately folded and disposed of as transverse ridges or lophs on enormous dental plateaus.

The largest elephants have lophodont teeth which are about a foot or more in length and one-third of a foot in width.

These are the teeth that have low rounded mound-like cusps which are entirely covered with enamel. They wear down evenly.

Bunodont teeth are present in man, some rodents such as a white-footed mouse, some hogs, some primitive ruminants, and rhinoceros.

In later mammals, cones were arranged in a triangle forming tritubercular secodont teeth. Then crests connecting the tubercles were formed which led to the evolution of selenodont teeth and lophodont teeth.