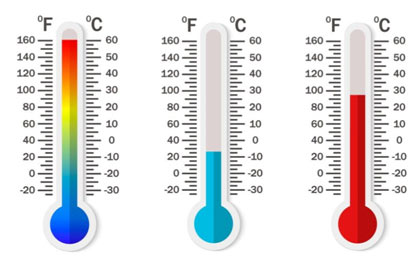 The degree of hotness or coldness of the body is called the temperature of the body.

A scale is indicated around the thermometer. The warmth of the body in touch with the thermometer can be read on that scale. Three scales of temperatures are in common usage. These are: A Kelvin is a unit of measurement for temperature. It is called after the Glasgow University engineer and physicist William Thomson, 1st Baron Kelvin. In SI units, the unit of temperature is Kelvin (K) and its scale is also named Kelvin scale of temperature. The interval between the upper and lower factors is split into 100 equal parts. Therefore, an alteration in 1°C is equivalent to a change of 1K. The lower fixed point with this scale equates to 273 K and the upper fixed point is at 373 K. The zero on the Kelvin (K) scale is known as the absolute zero and is equivalent to – 273 °C. Absolute zero is the possible coldest temperature. Absolute zero describes a condition where all of the energy of some system is extracted. It is the ideal temperature where gases can become liquified. But this temperature is impossible to reach.

Conversion Of temperature into different scales

From Celsius to Kelvin

This can be obtained by using this formula.

What will be the temperature in Kelvin when it is 30 °C on the Celsius scale?

By putting the value of C

From Kelvin to Celsius

This can be obtained by subtracting 273 from the given temperature.

From Celsius to Fahrenheit

From Fahrenheit to Celsius