The specific heat of a substance is the quantity of heat required to raise the temperature of 1-kilogram mass of the substance through 1Kelvin.

The specific heat capacity of the material is a physical attribute. Itis also an instance of a substantial property since its value is directly proportional to the magnitude of the system being analyzed.

This ∆Q is the quantity of heat absorbed by the body and c is the constant of proportionality referred to as the specific heat capacity or simply specific heat.

Thus, the specific heat of a material formula is

Since the absorbed heat is equivalent to the shift in the internal energy, so heat is proportional to the mass and change of temperature of the body.

The transferred heat depends upon the substance in order, as an instance, the heat required to raise the temperature will be not the same for alcohol compared to water. For the same substance, the ∆Q also be contingent upon the phase (gas, liquid, or solid).

Hence, the temperature variations from summer to winter are much smaller at places near the sea than land far away from the sea. For instance, as you can observe in Karachi.

The engine will cease unless it is not cooled down. Water circulating across the engine keeps regulating temperature. Water absorbs undesired thermal energy of this engine and dissipates heat through its radiator. 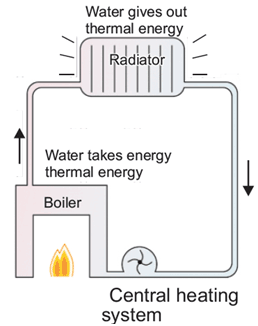